I have been reading everything about Mata Hari that I could get my hands on for years.   So I actually know quite a bit about her life, but that didn't prevent me from leaping at the chance to get a review copy of Mata Hari's Last Dance by Michelle Moran.  I requested it on both Net Galley and Edelweiss in an excess of enthusiasm.  Both came through.  So I would like to thank the publisher for approving me twice for this book in return for this honest review.

I had recently read and reviewed The Rebel Queen at Shomeret: Masked Reviewer  here.  I appreciated the fact that Michelle Moran had written about such an unexpected subject as the Rani of Jhansi.  I liked a number of the characters in that book very much.   This increased my anticipation for Mata Hari's  Last Dance which has a very lovely cover. 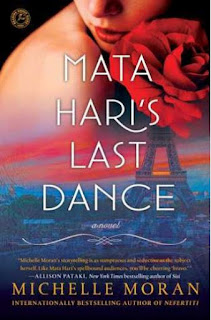 I wish I could say that I loved the book.  I certainly wanted to love it.  I have to say that it's Mata Hari's life in Java that most interests me.   This is where she learned to dance in the tradition of  Hindu temple dancers.  This is also where her marriage nearly destroyed her.  It's a very dramatic time in her life, but Michelle Moran doesn't show us very much of it.  There are a few flashbacks that are very powerful, but I wanted to see more.

I feel that this is a serious structural problem.  It seems to me that without seeing Mata Hari's life in Java as she experienced it many readers will find her so unsympathetic that they will abandon Mata Hari's Last Dance without finishing it.   It was knowing what had come before Paris that allowed me to understand why she came to Paris, and why she behaved the way she did.  She may have no credibility for some readers.  They may believe that she is being as dishonest in her narrative as she was toward most of the people in her life,  or they may stop caring about her.  The strongest flashbacks to Java come far too late in her story.    Mata Hari cultivated an air of mystery to increase her audience as a dancer, but the readers of a biographical novel expect to be rewarded by being told the truth about the protagonist from the beginning,  or at least the truth as interpreted by the writer.   I wonder if Michelle Moran was too ambivalent about Mata Hari to allow her readers to like her.

I should say that I was reading Marlene by C. W. Gortner at the same time as I was reading Mata Hari's Last Dance.   I reviewed Marlene on this blog here.  Mata Hari and Marlene Dietrich had some similarities.  They both built careers on pushing beyond the boundaries of what was considered acceptable.  The main difference between these books is that Gortner told Marlene's tale chronologically.  I felt drawn into the narrative, and that Marlene was sharing confidences with readers.   Like every other human being, Marlene could deceive herself, but I felt that made her realistic not untrustworthy.  I wanted to believe in Moran's Mata Hari the same way, but I felt shut out by the withholding of crucial background information.  I think that others may also have that reaction.

In the opening of the novel when Mata Hari was establishing herself as a dancer, I enjoyed reading the descriptions of her performances and her interaction with the audience.   Yet the book's focus wandered away from Mata Hari as a dancer into a long series of relationships where she behaved herself very badly.  I found this tiresome and unengaging.  As a result, I can't recommend Mata Hari's Last Dance.