The Agency 2: The Body At The Tower by Y.S. Lee 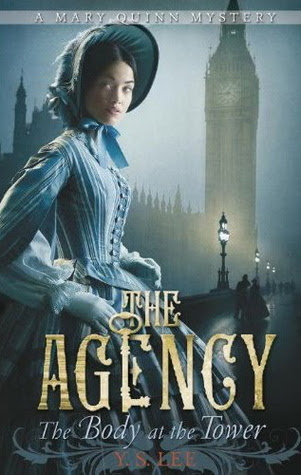 This is the second installment of The Agency series about a young lady in Victorian England who is doing undercover work for a secret agency consisting of only women. I love these books and everytime I read them I taken back to my Nancy Drew obsession days...

The young lady is Mary Quinn. The case is of course, a dead body. The setting is the clock tower at houses of parliament aka Big Ben aka St. Stephen's tower.

The tower is under construction and mysterious goings on are occurring around and on it. A bricklayer falls to his death in the middle of the night from the top. Why? Is it foul play? An accident? Why was he there at that time?

It is up to Mary Quinn to find out and to do this, she dons male attire and calls herself Mark and heads out to the construction site to work. She doesn't count on running into James Easton again tho.. Those who read book one (A Spy In The House), will remember this handsome fellow who appeared at all places and times, even in closets. He could very well foil her plans in this one.. or help Mary make her case.


There's drinking on the job, love affairs gone wrong, petty theft, annoying reporters, and men on the "take." Mary must get to the bottom of it all without falling or being thrown from the clock tower herself. While attempting to solve the case, Mary also has her own private issues. She longs to know more about her Chinese heritage, but will she ever come to terms with it well enough to find out what she wants to know?

This is a mystery so I'm leaving it at that. This was a fun, light read and just what I needed.

Laugh out loud moment: Mary has discovered beer (inevitable when working with all men) and thinks to herself while sitting in the Pig & Whistle.... "On a diet that meant she was eating less than ever before, in a job that required more physical labor than she was used to, she recognized in her daily pints an important form of nutriment. Harkness was off his rocker, trying to ban his workers from beer. How else could they find the energy to work?"

I bought this book from Amazon.