I want to take a moment to share with all of you a sneak peak at Russell Whitfield's newest book cover coming out March 15, 2011 from Myrmidon Books.  I say sneak peak because the cover is not yet posted on Amazon so I feel pretty important right now. :)  Anyways.. this is the book I am the most excited about reading in 2011.  So check out this fantastic cover! 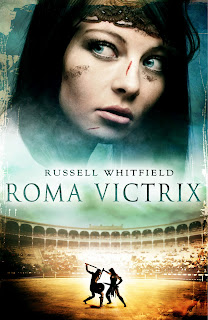 The summary (taken from Amazon.  No real sneaky peaky here): Four years have passed since Lysandra's epic but inconclusive battle with her hated rival Sorena in the arena of Halicarnassus and after which both combatants were granted their freedom by the ambitious consul, Trajanus. Now Sorena has found refuge among the Dacian hordes of Decebalus where she leads a vicious troop of horsewomen. Into her hands falls the young tribune Gaius Minervius Valerian and she ponders whether to deal him a slow and painful death or release him to journey back to Rome in shame and ignominy as the sole survivor of the empire's most humiliating defeat for half a millennium. Meanwhile, back in Halicarnassus, Lysandra has become accustomed to easy living and suffered a creeping and insidious addiction to alcohol that, together with her unabated hubris, is sapping both her self esteem and the friendship of those she loves most. But now the Emperor Domitian has called for a command performance at Rome's newly built Flavian Amphitheatre known to history as the Coliseum. Lysandra is invited to fight Rome's adored Gladiatrix Prima, the beautiful and deadly Illeana known as Aesalon Nocturna, the Midnight Falcon. Her record is devastating: thirty bouts; thirty wins- no draws or losses. Lysandra has to face up to all that she is and all that she must become as all roads lead to Rome.

Why am I so excited about this one?  Because I LOVED the first one.  I've never read about a more gutsy and amazing female and you know I love reading about tough chicks.  In case ya'll missed it back when it came out in 2008, here's the first one and my thoughts on it: 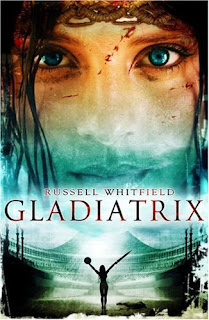 Gladiatrix is a fantastic story!! It offers an incredible look at what life may have been like for gladiatrices in early Rome, but amidst the details is a story. An intriguing one at that, full of drama, love, revenge, and war. The reader gets to know Lysandra, a shipwrecked priestess now a gladiatrix slave and her friends as well as enemies thoughout the novel and there is a suspensful build up to a battle to beat all battles, keeping the reader literally on the edge of their seat. The lesbian love scenes were actually very few and the details were tasteful and even romantic, offering a view into the deeper feelings and desires of the characters. As with any novel involving war, there are violent scenes, but I did not feel they were too much. My heart beat actually quickened as tho I was in the arena myself. Lysandra often comes across as extremely arrogant, as well as brave and fierce, but truly an amazing woman in the end.

Gladiatrix would be the perfect movie. Sex, violence, love, and war. It would put Gladiator to shame. 5/5 stars.

I liked this book so much that I am going to RE READ it.  Yes, I know.  I have a pile of 25 books sitting there awaiting my attention and another 25 on my Kindle, but I'm gonna re read this one before Roma Victrix comes out.  And I'm looking forward to it. :)
Posted by Tara at 10:33 AM