Our Lives Are the Rivers by Jaime Manrique 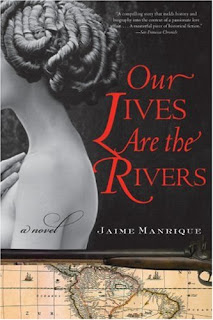 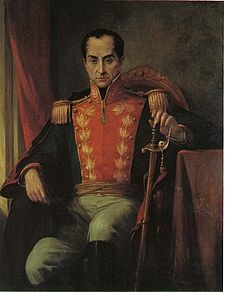 Wow. A very good book. This is a historical novel about Simon Bolivar, the "Liberator" and the woman he loved, Manuela Saenz, "liberatadora del libertador," the liberator of the liberator. Bolivar was known as a dictator. His goal was to liberate South America from Spanish rule and unite the countries into one country: Gran Colombia.

The book begins with a young Manuela. She is a bastard and her deceased mother's family treats her as one. She is sent to a convent for schooling where her and her friend Rosita notice strange goings on and visitations at night. "Manuela, I'm not sure what they're doing in there, but I don't believe they're saying the rosary."


The novel continues and chronicles Manuela's reunitement and then estrangement with her father and his family, her doomed elopement with a Spanish soldier, her arranged marriage to an Englishman, her assistance in liberating Equador from Spanish rule, and finally, she meets Bolivar when she hits him on the head with a laurel wreath. 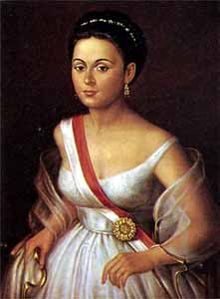 They have a passionate love affair that lasts for years. "From that day on, I counted the hours of the day till evening, anticipating that moment when i would lie again in bed with him. Our hunger for each other was insatiable."

This is scandalous because she is still married to the Englishman. However, her own matrimonial ties do not stop her from threatening Bolivar should he dare to have an indiscretion.

-Feeling his swelling press against me, I said, "Simon Bolivar, you listen to me, senor, Liberator or not, if I find out you're making love to other women, I will get to Guayaquil before you know it and"-I squeezed his member-"I will cut this off, pickle it, and send it as a present to King Ferdinand."

Don't let her picture fool you. This is not a docile woman. She even holds a pistol on a visitor in her parlor and gives him five seconds to get out of her sight.

The story is told from her viewpoint and the viewpoints of her slaves. I think the entire story could have been told from Manuela's POV alone, but the effect in the end tied up rather well.

The only thing preventing me from giving this a 5 is at times Manuela irritates me. She begs and whines to Bolivar constantly, "Take me with you.. you better not cheat on me..blah blah." And when he does cheat on her, she slaps him, slaps the wench, and takes him right back. She appears very weak at times. Also, she professes to be against slavery, but at all times, she has Jonata and Natal serving her food, following her around the country, taking care of her. When Natal requests freedom in order to get married, she is denied and forced to go fight alongside Manuela complete in a Colonel's attire. And.. well, honestly, after you publicily cuckold your husband and run to the General's bed, do you really thinking you're entitled to any of his estate? I beg to differ, chica.

The story ends sadly with an on old Manuela exiled to Jamaica after having survived assassination attempts alongside her lover, Colombia's political upheaval, and the loss of her native home. The conclusion consists of the plague and a piece of paper floating on the wind that says, Come to me. Come soon. Come sooner. Truly, an amazing ending.

Manuela was a brave woman worth reading about. If this novel is to be believed, she saved Bolivar's life two times.

Four stars and I got this from the Library.