The Raven's Bride by Lenore Hart 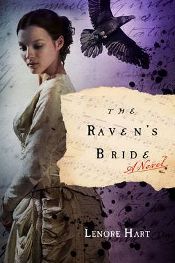 First of all, this is one of the best covers I have seen this year. Absolutely gorgeous.

This is a historical novel about Edgar Allan Poe and his wife, Virginia aka Sissy. It is told from Sissy's POV and begins in Baltimore with her as a child playing with dolls and ends with her "haunting" Edgar in a way.

Sissy and Edgar are cousins. She loves him from the moment she sees him and they agree to marry and he promises to always care for her and her mother. They marry when she is a mere 13 years of age, almost 14 and he is 26. (They don't do it for a while though.. she's 16 before they get it on...)

Basically, they move from place to place while Edgar writes, succumbs to the drink here and there, quits his editing jobs, and uproots them all over again. Sissy's mother pretty much becomes their maid, follows them everywhere, cooks, cleans, does laundry, takes care of them when they are sick. I liked the mother despite the fact she pretty much runs the show. She says something thought evoking at one point, "People have often needed me, but-no one ever wanted me before to, to ... just be with them." 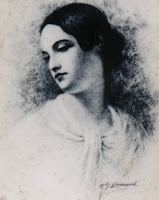 Sissy just sings, plays music, gardens, walks to the market, and eventually ends up coughing a lot. She gets consumption. This is what I didn't like... Sissy feels.. worthless.. always has mommy to do everything for her.

The novel is well written and a superb look at the life of Edgar Allan Poe and what was behind his dark musings, poetry, and writing, but by the time I reached the 70 % mark, it grew repetitive and I grew bored.

Favorite quote, again from the mother: "you can't complain of things to a man, for you see, it only irritates and makes them angry. At least when it's not something they can quickly remedy."

Three stars. I bought this on Amazon Kindle.