In Ride for Rights, my historical young adult novel, Angeline and Adelaide come across a castle during their trek across the United States...

The nearer the sisters grew to the beautiful peaks, the more exhausted they became and upon arriving in the small town of Colorado Springs, they were no longer staring at the mountains, but searching for a respectable hotel. Upon riding through a small maze of rock formations, the women thought they had found one, a very large one. Whereas the sight of the majestic peaks from seventy miles away had caused them to stare in awe, the sight before them now caused them to stop and stare in complete shock and wonderment.
Ahead of them was a castle. It was a very large mansion made of brown stone with tall beige framed windows and a matching tower. It appeared so out of place in what Angeline had always thought of as the “wild west” that she found herself wondering if she was hallucinating or if perhaps they were lost? Was it possible they had crossed an unknown bridge to England?
Adelaide broke the stunned silence. “Surely, that is a hotel,” she declared, “and I don’t know about you, but I would sure like to spend a night or two there!”
The sisters did not waste a moment more. All thoughts of scenery were forgotten as the women shared an excited smile, and aimed their motorbikes towards the looming castle ahead. Surely it was a hotel and in a small town like this, it was bound to have available rooms and due to its elegant appearance, indoor plumbing. Thoughts of warm baths and clean bed linens propelled the sisters towards the brown castle. 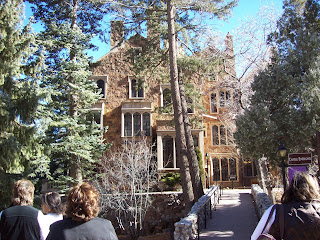 I had the pleasure of visiting this castle myself in January, but let me tell you a bit about the place... It's a 67-room English Tudor style castle built by General William Jackson Palmer, the founder of Colorado Springs. His wife was from England and so he built this for her, to mimic an English castle. It contains 24 fireplaces, all them brought over from England. 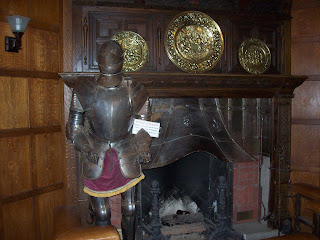 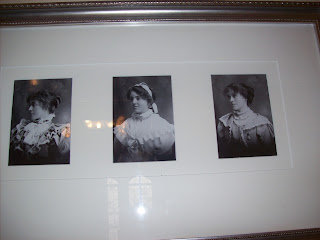 In Ride for Rights, Angeline and Adelaide make a friend in Elsie, the last family member left residing at Glen Eyrie, in the novel. Though the name is the same, Elsie is a figment of my imagination. She loves horses, is a suffragist, and encourages Angeline and Adelaide to summit Pike's Peak.

When I visited the castle, I took care to pay attention to the real Elsie's bedroom. She was a very private woman and even required visitors to her room to go through two doors.

Glen Eyrie is now owned and operated by a group called the Navigators.