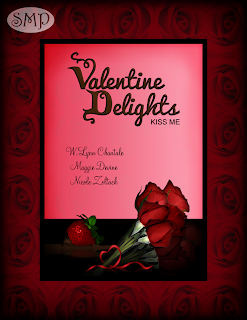 This is an anthology of three short stories just in time for Valentine's Day.

First up, is The 14 Days of Valentines by Maggie Devine.

A woman lawyer suddenly gets a secret admirer who sends her expensive gifts everyday starting Feb 1 till Valentine's Day when she's supposed to don her new dress, earrings, and bracelet and meet her potential suitor for a fancy dinner. Who is the man? Is her boss, John, who has been trying to convince her for some time that they would be good together? Or is it HIS boss whose she's had HER eyes on, but is otherwise taken? Or is it that man upstairs who just wants to bed her?


Liked: I honestly didn't know who it was till it was revealed. Common sense kept telling me it was the guy she wanted it to be, BUT there were enough doubts in the story to keep me on my toes. I started questioning the happily ever after and who it may be with.


Didn't like: The abrupt ending. And no, it has nothing to do with it being a shortie. I love shorties. I just didn't feel the connection required btw these two, who have never dated before, but are suddenly planning to have sex and live together. Relationships don't build to that level without some dating.


Second up, Love's Fortune by Nicole Zoltack.
Woman loses job, is walking the street, when she's offered another job...at the circus! That's pretty cool! So she takes the job as a fortune teller, meets a shape shifting lion, and kinda learns some stuff from her new job: such as, she needs to practice what she preaches.


Liked: The way she makes a widowed woman feel better about moving on.. the way she tells a man that the only reason he hasn't found love is because he's shut himself off, basically. He's preventing himself from finding love. In the process, the heroine realizes she's doing the same thing. Real sweet moral there.


Didn't like: Fail to see how the shape shifting really moved anything along. Or them wanting her to be a witch. The shape shifting, except for him saving her life, didn't mean anything.


Third, The Designer's Bride by W. Lynn Chantale.
Story contains both sensual content and suspense. The sensual is hot, sexy sex between the heroine and the man she loves and wants to marry. The suspense plays into the story when her father keeps barging into her life demanding she marry a man she hates, said man in tow with him everywhere. He's a real jerk. I didn't like him at all.


Liked: The sex. Also loved Jordan, the hero, and how he makes everything just perfect from the ring to the dress to the plans. I thought that was just awesome. Except for the dad, this story was like a fantasy come true. It also had me reeling for a minute there toward the end as I seriously worried things were ruined. Also, Chantale injects the perfect amount of description into her story, not too much, not too little.


Didn't like: I would have liked things to end better btw the heroine and her dad. I got kind of sad by the way things panned out there. I would hate for my dad and I to be on the outs like that. This was my favorite story, however due to the sensual elements and just OMG hero.


Conclusion: Four stars for this anthology. :) I receive this from an author who wanted my honest opinion.