Suffragette: Review of a New Movie

I subscribe to an e-mail list for the Landmark movie theater chain.  Suffragette was mentioned as an upcoming movie in October. I got excited. Then the theater near  where I work put it on the marquee as coming soon.  I saw that announcement on the marquee every time I passed that theater after work. I love books and movies about suffragettes, so I've been very impatient.  It opened at that theater yesterday and I went to the first showing. 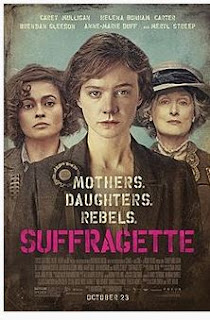 Suffragette is a British film about the late 19th and early 20th century women's suffrage movement.  It's the first movie which contains scenes that were actually filmed in the Houses of Parliament according to the article about the movie on Wikipedia.

The central character is laundress Maud Watts played by Carey Mulligan.  Another important  character is Edith Ellyn played by Helena Bonham Carter.  There is also an appearance that amounts to only a bit more than a cameo by Meryl Streep as Emmeline Pankhurst.

As a movie I thought it was very good.  There was nice cinematography plus accurate period sets and costumes.  I thought that the performances were effective.   Americans will probably be seeing this movie on PBS eventually.  If my tone sounds less than enthusiastic, it's because I was disappointed.  I imagine that most members of the audience for this film probably wouldn't feel that way.

From a historical point of view,  I felt that Suffragette was both simplified and distorted.  It chose to focus on Emmeline Pankhurst's wing of the British suffrage movement, but the movie was supposed to be telling the story of working women involved in that movement.  Emmeline Pankhurst's daughter Sylvia was the one who actually spoke to working women.  Yet she only received a brief mention in this movie.  As a socialist and labor activist, Sylvia thought it was important to help these women and deal with their issues.  So she was more than an advocate for women's suffrage.  She cared about working women, and wanted to improve their lives.  She was also a pacifist who was opposed to Emmeline Pankhurst's violent tactics.  There's a brief biography of her on a Sylvia Pankhurst Website.

I first learned about  the role that Sylvia Pankhurst played in the suffrage movement when I read Suffragette Autumn, Women's Spring which I joint reviewed with Tara on Book Babe here. This novel by Ian Porter focused on a working class perspective of the Titanic disaster and the British women's suffrage movement.  I absolutely loved it and wholeheartedly recommend it.  Porter portrayed Emmeline Pankhurst and her daughter Christabel as rather prejudiced against people of working class backgrounds.   So from the perspective of someone who read Porter's book, I thought it was extremely ironic that a movie that wanted to focus on these women would show us Emmeline Pankhurst as their leader, and virtually ignore Sylvia Pankhurst.

I was further disenchanted by Suffragette when I read the background on the real woman who supposedly inspired Helena Bonham Carter's character. Edith Ellyn, the fictional character who appeared in the movie, was apparently a doctor who worked in a dispensary in a working class neighborhood.  She was supposed to have been inspired by Edith Garrud who was one of the first women to teach martial arts. She ran two jujitsu dojos with her husband, and she taught jujitsu to a women's corps of body guards who fought hecklers at women's suffrage rallies.  There was a very short scene of Edith Ellyn teaching martial arts in the movie, but there was no emphasis on martial arts in the film.  Edith Ellyn was a likable character, but not especially interesting.  Edith Garrud was absolutely awesome! I would have loved to have seen her in Suffragette.

Here is the cover of the first Suffrajitsu graphic novel. 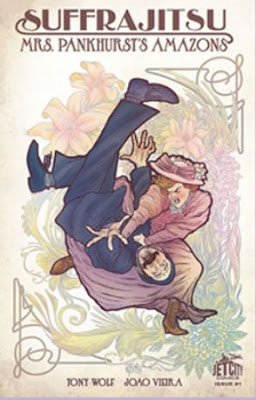 I really want to read this, but unfortunately my Kindle doesn't display color graphics.  So I'll have to wait until I have enough spare cash for the print version.

I'm not sorry that I saw Suffragette, but I probably wouldn't have rushed to the theater to see the very first showing if I had known that it wouldn't meet my expectations.  Perhaps one day there will be a movie about Edith Garrud.  I will be the first on line to see it.
Posted by Shomeret at 10:31 AM