The Paris Protection: A Thriller About A Female U.S. President Under Threat in Paris


This is a time when a thriller about very well organized terrorists trying to assassinate the President of the United States in Paris is particularly chilling because it seems all too real.   In addition, this threatened President is a woman at a time when the leading Democratic candidate in the Presidential race is also a woman.  Given the current circumstances, some readers may find this hard to take. 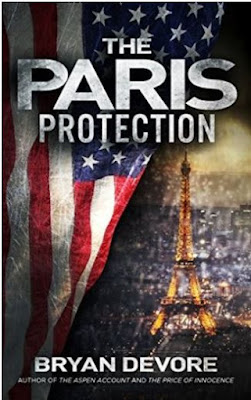 The Paris Protection is filled with nearly non-stop suspense.   The survival of the U.S. President remains in doubt until very close to the end of the novel.   There’s a great deal of violence with a high body count. In the book, much was made of the fact that the struggle between assassins and the Secret Service is usually brief.  At one point it occurred to me that if a different decision had been made at the beginning of the crisis, it could have been terminated quickly with less loss of life.  It did seem to me that the plot was more than a bit contrived.  Devore manipulated it to prolong the President’s danger for the length of an entire novel.  Yet it was compelling.   Most thriller fans will probably consider The Paris Protection a gripping narrative.

I very much liked some of the characters. The author focuses on a few Secret Service agents who were courageous, determined and resourceful.  Rebecca Reid is the most central character in these events.   I appreciate the fact that Devore portrayed a female Secret Service agent as being so good at coming up with fast solutions at the moments when they were most needed.

I was also pleased that brave Parisians also had their moment in the storyline.  I’d like to believe with author Devore that the spirit of Paris remains strong in the face of terrorism.   This is an inspiring element in The Paris Protection.  The sequence that takes place on the street in Paris is a powerful one.

On the other hand, I find the motives of the chief villain rather byzantine.   Why does he hate his own country as much as he does? It didn’t seem to me that his experiences explained his feelings.   If anything, I would have thought that he’d be very guilt ridden.   I realize that some sociopaths are incapable of guilt, but there has to be a missing flashback locked inside his labyrinthine mind that would have made this terrorist leader more understandable to me.

So this book has pros and cons.  Good copy editing was one of the positive points.  This is one of the few books I’ve read lately with no typographical errors.    On the whole, I thought that the positive outweighed the negative.  The Paris Protection is a novel that’s worth reading.