If this blog is about anything it's about female protagonists like Yael in Wolf By Wolf  by Ryan Graudin.  Yael is a teen who is a concentration camp survivor in an alternate world where Hitler won World War II. She escaped the camp using a paranormal power that allows her to assume new identities easily, but she still has concentration camp numbers on her arm that can't be removed.  She elected to cover them with wolf tattoos.  So she is in the process of concealing her past and her former identity wolf by wolf. 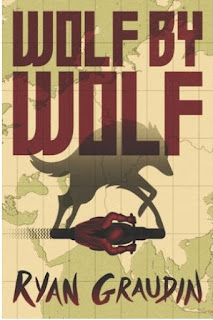 Needless to say, Yael's gift is very useful to the resistance movement against Hitler.   They developed a scheme that involves Yael becoming Adele Wolfe, a female motorcycle racing champion, and winning the Third Reich's biggest race in order to be able to get close enough to Hitler to take him out.  It's a complex and risky plan.   It requires courage, persistence and constant vigilance.  In this world spanning race from Berlin to Tokyo, Yael can't relax for an instant or ever fully trust any of her competitors.

The novel includes flashbacks to Yael's past.  We learn how she acquired her paranormal power and the emotional impact of her terrible experiences.  At one point, Yael realized that she hadn't been herself in so long that she'd forgotten what she looked like.   She tries to hang on to her sense of herself by using the very thing that is concealing who she used to be.  For Yael, each wolf tattoo represents someone who had been important to her.  I empathized with Yael's desperate inner struggle to preserve her identity while she is pretending to be someone else.

The ending of Wolf by Wolf is unexpected.   Although this alternate world's situation isn't fully resolved, there is hope for the future.   Having hope in such grim circumstances is enough for me.  I am willing to wait for the 2016 sequel to discover the fate of Yael and her universe.  I want to believe that she will be as inspiring in the second book as she was in the first.