I'd been meaning to read the Sarah Tolerance mysteries written by Madeleine E. Robins for some time.  It was a Goodreads recommendation that caused me to finally start Point of Honour, the first in the Sarah Tolerance mysteries.  It was an obvious choice for me since it was about a woman who knew how to use a sword.  I can't resist books about swordswomen.   I began reading it on Thanksgiving as a holiday treat that I knew I would enjoy. 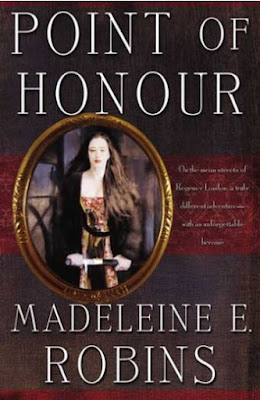 Sarah loved swordplay as much as I do.  She was a daughter of English nobility and wasn't supposed to learn how to use a sword, but  she fell in love with her brother's fencing instructor and ran away with him.   They lived together for many years in exile from England, and he taught her everything he knew.  All of this happened before the book started, so these aren't spoilers.   This is Sarah's background.    Her family had disowned her.  This meant that when she returned to England after the death of her lover, she had to figure out how to make her own way in life.

In the context of Regency England, she was a "fallen woman" and would have been expected to join what is often called "the world's oldest profession".   So she created her own alternative, and Madeleine Robins created an alternate continuity  in which a woman like Sarah Tolerance could exist.

A GR friend that I respect very much complained about the way Regency England had been altered in her review of this novel.  I found that I disagreed with her.   I think that if an author is ignorant about the historical period in which the novel takes place and makes errors due to lack of research, that's inexcusable.  Yet when an author deliberately creates a different continuity and discusses it in an Author's Note, that's alternate history which is a sub-genre that I enjoy.

The main difference between this Regency England and the one we know is that the Regent is the Queen, the wife of the mad King George III.   There are other small changes that make the social landscape a bit more friendly to an independent woman.   One example is that she can join a gentleman's club that accepts women so long as they can afford to pay the membership fee.   This doesn't mean that Sarah doesn't encounter prejudice.   She is insulted and disrespected nearly every day, but she manages to maintain her self-respect.

Sarah invented a profession that didn't exist in 1810 when the events of Point of Honour take place. She called herself an investigative agent.  In our contemporary world we call them private investigators or detectives.  In our world, Eugène-François Vidocq became the first private detective in 1833.  For more information about Vidocq see the Wikipedia article about him.

The case that Sarah is hired to investigate in this first novel doesn't sound very interesting.  She is expected to find a fancy jeweled fan that an Earl had in the past given to his mistress. The case turns out to be far more complicated and dangerous than Sarah had ever imagined.  There are a number of swordfighting scenes for readers who are swordplay fans.

Sarah Tolerance is a wonderful character.  Her skills, her loyalties and her principles are all tested in this book, but she is spirited, resilient and always a woman of integrity in a world where a woman who has lost her virginity is believed to have no honour.

Even though there are only two more books to read in the Sarah Tolerance series,  I think that this protagonist is going to be a new favorite of mine.   Perhaps in the later installments, she will become more respected and recognized.