The Heartless City by Andrea Berthot

This the second book that I've read from the publisher Curiosity Quills.  The first one, Alice Takes Back Wonderland by David D. Hammons, was such a delight that I had high expectations for The Heartless City by Andrea Berthot.  I reviewed Alice Takes Back Wonderland on Book Babe here.  More recently, I received a free copy of this book from the author in return for an honest review.

Like the first Curiosity Quills book that I tried, The Heartless City is also derived from a classic novel. It's The Strange Case of Dr. Jekyll and Mr. Hyde by Robert Louis Stevenson, a precursor of every modern horror novel in which a man turns into a monster.   The Heartless City isn't a retelling of Stevenson's work, but an imaginative extension of his concept.  I would categorize it as YA dystopian alternate history.  It takes place in a terrifying Victorian/Edwardian London that never was. 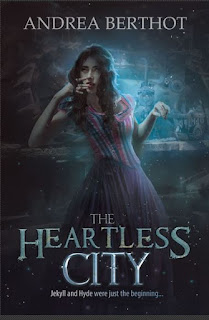 Why am I reviewing this dystopian novel based on a famous horror story when I've often stated quite emphatically that I don't read horror and that I'm not fond of dystopias?   I just had a feeling when I read the description that this wouldn't be the sort of book I mean when I say that I detest those genres.

The next question is why I would review this book for Book Babe. There is a male protagonist, but he encounters a dance hall waitress by the name of Iris Faye, who is a great deal more than she appears to be.   The plot actually revolves around Iris, and she is a very strong female protagonist.

So what happened to London in this alternate timeline?  After the death of Dr. Jekyll, a drug that turned men into Hydes became widely distributed. Many Londoners of all classes were becoming monstrous Hydes.  Queen Victoria and Parliament fled the city.  London was quarantined.  A quarantine is normally established to contain an epidemic of a contagious disease.   The Hyde phenomenon was neither.  The Hyde drug needed to be deliberately injected in order for someone to become a Hyde. In Berthot's version, the Hydes lack compassion and therefore consume human hearts.  This makes them monsters who are somewhat akin to those trendy zombies. Zombies can't think for themselves and therefore consume human brains.   No one can tell these lumbering creatures that eating hearts or brains won't help them.

Enter our heroine Iris Faye, the only girl who dares to walk alone through the streets of this London after dark.    How does Iris survive?  Who is she really? The answers to these questions would be spoilers.  It takes the entire book to answer them fully.

As in many YA novels, there is a romance element.  It is the expected romance between the two teen protagonists. Romance fans will be happy to know that despite all obstacles, there is a HEA ending for them. Male protagonist Elliot Morissey is the son of the Lord Mayor's personal physician.  He is grief-stricken by the death of his mother at the hands of a Hyde.  A girl who doesn't fear the Hydes is a revelation to him.  He is fascinated by Iris, and she helps him find the courage that he never knew he had.

I have to admit that I was also fascinated by her.   Once I had the explanation for the mystery that was Iris, I had to work it out in my mind.  Was the resolution scientifically feasible?  I'm still not sure. I have arguments for and against it written in my book journal.   Since there is a possibility that it might be plausible, I'm willing to consider this novel science fiction rather than fantasy.  Other readers may think otherwise.  YMMV, folks.

Iris is the name of the goddess of the rainbow in Greek mythology.  The rainbow is a sign of hope.  I found this to be a hopeful book and it was largely because of Iris.