The Chocolate Fix by Kevin Farran 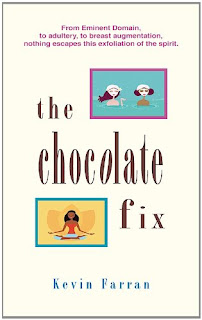 I was pleasantly surprised by this novel. It had a rough beginning. A whole bunch of characters were introduced at once and who they were was very vague. I was beyond confused.. Who is who? What's this woman's problem? What is it with this woman and a piece of cement? But I scratched my head and read further..

It's a novel about four different women, each with their own problems to overcome.

My personal favorite is Thelma. She's a very large African American woman who has been ridiculed and abused her whole life for being fat. She decides to rise above her "station" in life, to prove to others that she is more than a fat woman of color. She is determined to be an architect and is just finishing up school. She should be happy, right? Not totally... See, while she has been struggling to get a degree and a job with a good firm, friends of hers in her African American community consistently bash her for "forgetting she's black" and trying make it in "whitey's" world...

Then there is Sinead.. a feisty, red headed, Irish gal who works as a butcher. She is a bit self conscious of her appearance. She doesn't feel sexy, desired, or attractive.. and her husband is no help in that department. But you wanna know what I love about this gal? When she catches her husband getting horizontal in another woman's waterbed, she doesn't sit there and cry about it.. She does something else. She's got balls!!!

There is also Simone. Simone is the oldest, around 44. She was burned badly by a man.. (of course!) years ago and has carried a grudge ever since. She starts to realize that despite all her young boy toys, her gorgeous white Jag, her sexy gay driver, and her fashion business, she is lonely. Something is missing from her life.

Last, and the only woman I had difficulty relating to, is Patty. Patty has been grieving for 15 long years for a dead husband. I'm talking extreme grieving.. going to his grave for HOURS every Friday and refusing to date any other man and la de da.  The woman has issues. Is she going to "get with it" or pass on her issues to her teenage daughter?

All these women meet to heal, laugh, and learn to love themselves again at a Spa/retreat type of place. I thoroughly enjoyed their banter, playing, arguments, and even the underlying issue about eminent domain. You see, all these women are connected by not only a spa, but their places of home or work.. One woman's work could ruin another woman's home..

Great book. There were some mistakes here and there but nothing to cry about. My only issue was the beginning.. though I finally put two and two together by the time I read the last page.. Thus, 4 stars.


I was provided an ebook of this by the author.