A Royal Likeness by Christine Trent 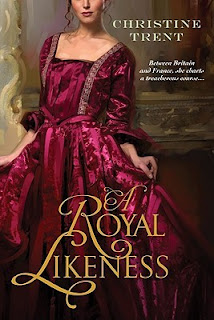 This is one of those books that contains both good and bad for me. The heroine, Marguerite, has an unfortunate turn of events resulting in the loss of her Aunt's doll shop and her husband. Her pity party comes to an abrupt halt, however, when the opportunity to work with Madame Tussaud, famous wax figure maker arrises.  For me, the story involving Marie Tussaud and even her son, the first half of the novel, was the most interesting.

I enjoyed the details of wax making from placing rolls of paper in the model's nose to placing the string just so.. Some real life historical figures pop up in the novel to have their wax figures done:

However, the novel had enough dislikes for me to drop it to a three star rating. As a matter of fact, had it not been for Madame Tussaud, I would have given this a two.. Let me explain why...

There's naive and then there's just plain stupid. The heroine is stupid. There's this fellow named Philipsthal and he has something going on with Tussaud. Tussaud hates him. Marguerite would like to get to the bottom of the entire thing, but rather than force the issue what does she do? OMG. She agrees to marry the dispicable man to help Tussaud. Well, I never once got the impression that Marg and Marie were THAT close.. However, at this point, Marg says the smartest thing she says throughout the entire novel. "I would like to visit your lawyer with you to draw up whatever documents are necessary to release Madame Tussaud from her obligations."

Well, five seconds later, she gives up that idea and hands her life away. She is far too agreeable and passive and just plain STUPID through the entire novel. She even bangs her head on a table and knocks herself out. LOL

Quote from page 181: "What have I done? Am I completely addlepated?"


The last half of the book has two men chasing Marg and also follows her brother in law. I hated his parts. His character did not interest me in the least. There's a shipwreck, wax figurines becoming life preservers (that is way cool!), and a historical battle where the heroine actually makes herself useful. (gasp!) Following this is some espionage...

Neverthless, by the time I reached the battle and espionage, I had begun to lose interest, partly because there was no more Madame Tussaud.

Three stars. I bought this book on Amazon.