I'm pleased to welcome Gilbert M. Stack today. He's agreed to answer a few questions about his new book:  Panic Button: Lighthouse Island. I'm hoping this is the first of a series and I'm hoping I get asked to review those too, cause this absolutely rocked, and that is not something I say often!

I'm not a fan of reality TV, but looking at it from a woman's POV, following a character in a book, feeling what she feels...just wow. I was riveted. As to be expected, the contestants of this reality show fight and argue nonstop. There is 250,000 bucks at stake...at first. And amid the fighting, there's fear, craziness, and romance.

There is no sex. It's not even needed. It's just nonstop, heart-pounding action.

The deal: A snooty college professor, an elementary school teacher, a handsome Adonis, a mechanic, a model wannabe, an overweight man, a tough African American woman, and older lady are thrown together on Lighthouse Island with a crazy keeper who seems to get way into his role.

There's shackles, a flooding cellar, a dry well, infested food, ghost stories, and mind games. The heroine is constantly faced with: hit the panic button, save so-and-so, do this, save so-and-so, and in the end, she may win or lose because of love. Can a showmance become a romance?

I loved it, and though the bickering got on my nerves at times, I could see as totally plausible. In moments of extreme stress and with lots of money at stake, people behave in appalling ways. How would YOU behave?

I give this one five bikes.


This book was incredible. I actually forgot to make questions and notes. LOL But here are a few:
Reality TV is hot so asking how the idea came to you seems silly, but I do wonder, is there any reality show in particular you like?
We watch a lot of Reality TV in my house. It’s mostly Big Brother this summer, but Survivor has always been one of my favorites. I really like the social game that has to be played to win these shows, but in Survivor you also have the difficulty of enduring physical challenges. These players are under a lot of stress and one poorly spoken word can cost them everything. I love them!

There’s one instance Boy Scouts is mentioned. Were you in the scouts and did you learn any cool survival techniques?
I loved my years in the boy scouts. We did a lot of backpacking and camping, and while we never actually needed these survival skills we talked about what to do in extreme circumstances a lot. I think this sort of challenge (i.e. How do you feed yourself on a deserted island?) shows up on television and in literature so often because people are fascinated by nature and want to know on some fundamental level if we’ve become too civilized to survive in the wild.

Is there a particular lighthouse that you visualized while writing about Lighthouse Island? Or perhaps one with a sordid history such as this one?
This is a tough question. I’ve always been fascinated by lighthouses and even used to fantasize about buying one and living in it. I don’t think that would be so bad today with cell phones and television, but back in the eighteenth and nineteenth centuries it would have been a different story. The psychological stresses that lighthouse keepers lived under must have been incredible. Lives literally depended on them every single night. And yet it was intensely solitary work, often requiring the men and their families to live in isolation beyond the edge of civilization. So while the keeper in Panic Button is a complete fabrication, I think the idea of the keeper cracking under the pressure and going a bit crazy is completely credible.

The contestants have no water for two days, only rum rations. Could you survive like that? And if so, would you prefer Captain Morgan or Bacardi?
Research is always one of the most enjoyable parts of the writing process and Panic Button gave me the excuse to learn a lot more about rum. Both brands are really good, but I have to come down on the side of Captain Morgan. I don’t know if it’s the historian or the romantic in me, but there’s something appealing about drinking the namesake of one of the New World’s most successful pirates who managed to keep his wealth by going straight.

Rook nearly gets stuck in a well. Heather was afraid of the dark, Ronnie of chains. Shackles…infested food, what would have made YOU press your panic button?
This is another tough question. What do you fear so much that being subjected to it would make you give up your chance to win a quarter million dollars? While the infested food would certainly make me gag, I think that it’s Hank’s fear that would have succeeded in driving me out the game. But I can’t say any more about that now without spoiling the story. 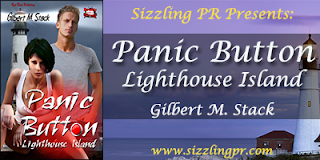 Thanks so much for having me on your website today, Tara. I’ve really enjoyed your questions and I always love talking about books with other readers. I hope you’ll friend me on Facebook at http://www.facebook.com/gilbert.stack and visit me on my site at gilbertstack.com.