Today, I'm sharing with you an excerpt of an up and coming fantasy novel. Please give Aurora a big welcome.

"As a fantasy writer, I want to take people into a unique world.  In my novella, Child of the Loch, we are transported into the mythical land of the Loch and follow Josephina McDonnell on her journey to become Queen. She faces love, betray and magic.

Excerpt:
Prologue
As the King, lay wheezing his last breaths, he contemplated his kingdom’s future. His fastest messenger had just been sent to the far west and would be riding past the borders of the Lochoan lands. The journey would take the messenger further than anyone had ridden in the last years of King’s rule.  Only one had made the arduous trek that had traveled through all the lands of his allies, leaving a trail of tears and sadness to a destination far beyond the pale, pink, rising sun and the blue rain clouds of the Loch.
The King squeezed his almond shaped eyes tight against the physical pain. He was so ravaged by the illness that no one would recognize the King, a ghost of his former self. Now, only his amber eyes were a distinguishable sign of his royal line.
The King had once been the handsomest man in the kingdom but now his pale, lined face contorted again and again as tremors took him. Clumps of salt and pepper hair fell from his inflamed pink scalp whilst fever blisters popped oozing water and lymph into jaundiced eyes, shut tight; flakes of pasty skin peeled from his dry lips like dried corn husks.
The King’s endured every moment of the physical pain of his illness without complaint, but it was the heartache that was unbearable and made him cry out to the God of his forefathers.  He longed for the days when he ruled with his beloved Queen and his son, the Prince, a shadow of them both.
The King could not escape the thoughts of his beloved son, a mirror of himself when he was healthy. Both men were hard-headed, amber-eyed and so unforgiving of each other, that it seemed that there never could be reconciliation. What transpired could not be undone and the now exiled Prince was far away in presence, mind and spirit.  For this, the King waited, begged, and prayed for death to come and sweetly end his pain. He needed it to release him from his bonds, but not before bringing the Prince home to the Loch.
The many years since the Prince had been banished passed with prejudice. The slow, steady decline of the once strong King was unexpected in the view of the long lives of his predecessors. Many believed that his illness came from mourning the loss of the Loch’s only heir. They knew that the King’s broken heart still bore the weight of the Queen’s death at the hands of a rival years earlier. However, not one person could begin to fathom the true reasons of the King’s illness. Test after test drew the answers and confirmations needed from the royal physicians. It was not grief that had stolen the spry King’s health but poison from magic of darkness or herb of the vine that took its hateful vengeance upon his body.
There was no antidote of herb or spell. The cure for one could cause another to slaughter him more rapidly and excruciatingly. The priests and apothecaries knew that the long list of poisons or black magics in the Loch that caused the King’s symptoms would all end horribly with the much-loved King cold and maimed in his grave. He would be unrecognizable to all who knew him and no hope of recovery. The King’s death warrant was signed, sealed and awaiting its hour of designation. The King was a slave in his own body, mastered by the unnamed venom that flowed throughout his skeletal body.
Imminent death has a way of boomeranging the thoughts of a life once lived and regrets harp like old women. The King again reflected on the hard truths that brought him here. He dwelled on the perpetrator of this horrific act of treason that would leave his kingdom heirless and without a future in its wake.
“My heir is gone and I’m to blame,” galloped through his departing mind.
Where had the time gone? It had been far too long since he last saw his boy, a man now, with a grown child of his own. A grandchild he had never seen face to face or held in his arms. How much had he missed in his arrogance and how could he get the rightful heir home in time to take the crown?
He stole a hard look outside his door that was flanked by relatives already fighting amongst themselves for their piece of what the King would leave behind.  The King laughed bitterly at their pettiness, knowing in heart that only the true heir could rule the Loch with the love and justice that she deserved.
He fingered the photos in his ashen right hand and stroked the cheek of the young, dark-haired woman with his thumb. Another spasm grabbed him rigidly.  In his left hand, his grip tightened on the scroll marked in the family seal pressed into black wax crushing and crinkling the paper written in a shaky hand. The King was fading and he felt the last of himself disappearing into obscurity, soon he would see his ancestors and his God. No magic good or bad could touch him in the Land of Light. 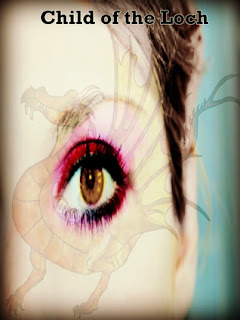 The King called for another page, one who would go to his most trusted and truest friend, Chian, the Sovereign of the Ogres in the Western Wood.  There was no time for one page to make the journey alone, though they would both travel through the Western Wood; the King knew his time was ticking down and nearly gone. Death waited by his beside, as a constant companion.
The King pressed the photo and the scroll into the page’s solid, strong hand and his grasp fell weakly from the page’s wrist.  The young man gathered his bounty, bowed low and ran for the door.  He mounted the waiting horse and set off for the Western Wood at a dash.
Barely conscious the King urged himself on, garnering the final bits of his strength.  He only needed to be strong enough for his son and the hope he carried with him to make it back to the Loch. The King would set it right, even if he never lived to see the outcome. The race for the crown was on.
“Come quickly, my son, for you hold the key to the future of the Loch,” he thought as he faded into the black, praying for his trusted pages’ safe journey and quick return. The King’s gurgling breaths could be heard throughout the castle and every subject loyal to the kingdom wept for the King’s impending death."
Author Bio:
I have always been a writer. When I first learned to write in Kindergarten, I wrote about pigs that "groo" wings and became "butterfys." I knew way back then that I would have a love affair with writing. Over 20 years later, that love flows over into writing novels, blogs, reviews and poetry. Come visit me on my blog.
Posted by Tara at 9:25 AM