Strong is Sexy Heroine of the Week: Cricket Hooper

Cricket Hooper would be perfect for Heroine of the week. She's strong because she raised herself on the mean cold streets of the US. She's a strong woman who never let's her heart get hurt. She has this with letting people get too close. She leaves everyone at arms length and she's good with that. She's sexy because she's a plus size, voluptuous, fashionista, with a pure soul.

We walked back towards the house. I was just about to become frantic, and then I breathed through it. “I can’t believe a house like this doesn’t have a wine cellar or a basement.”


Trey looked over at me and shook his head. “I forgot you were a serious wine drinker back in the day. It was your thing. I remember that.”

“Yes, it is, and I would damn near kill for a decent wine right now.” I pulled Trey closer to me and shivered.

“It’s a little chilly.” He pulled me closer, and we walked back to the house.

We went in through a side door, and then Trey pulled me to the corner.

“We do have wine cellar, but no one’s allowed down there right now,” Trey whispered.
“Why?” I whispered back.

“Because Mr. Paul has some guys down there he’s teaching a lesson to.”

“Oooh, what did they do?” I leaned into him.

“This big shot Indian over in Seattle has been buying his way in, and Mr. Paul don’t play that shit. He doesn’t care how much fucking money you got. He runs the casinos in Cali and Washington State .”

“Are there any dead bodies?” I asked with fake wide eyes.

“Nawh, Mr. Paul just had us beat the shit out of them for a few hours; he’s letting them go tomorrow.”

“Can I see? I won’t say anything, and I swear I won’t touch anything”

“Shhhh.” Trey said, and then we walked over to the cellar door and started stepping down. We entered an almost empty room with a wall-to-wall refrigerated wine chiller. Trey tugged at my arm, and we walked towards the other side of the room.

We walked up to a steel door, and I looked through the small glass window. There were four Natives sitting in chairs that were all tied up to each other. None of them was facing each other; they were all blindfolded. There was food all around them, and then I realized they were in the refrigerator.

I looked around for something to hit Trey in the head with, but found nothing. I saw a small table to the side, and it had their cell phones and wallets on it. My mind was racing, and I was running out of ideas.

“You know they haven’t said a word in English since they been here. They’ve been communicating in some old Indian language, and Mr. Paul is Indian himself and he doesn’t even know the language,” Trey told me.

“We need wine glasses.” I told him.

“Shit, I forgot. I’ll be right back.” Trey headed for the stairs, and I pulled my phone out. As soon as I heard the door shut, I dialed Chelle.

“Let all the seats down in the back and don’t come any closer to the house until I call or text you. Don’t let him know I am here. Make him think I am on the reservation and cannot come to the phone. Call Mrs. JJ, and fill her in. From what I can see their all okay. I gotta go.”

I hung up the phone and ran to the other side of cellar, looking for another door or a window, but there was nothing there. I still looked for something to hit Trey in the head with, but there was only the small table and that wouldn’t do anything.

I heard the door open, and then Trey was heading back down. But the person on the steps was not Trey; it was Troy .

“What are you doing down here, Cricket?” he asked.

“Trey brought me down to get some wine.”

“What are you up to?” he demanded.

“I give you myself completely for them.”

“Because the only man who’s ever loved me for me is in that room. And I’d die for him if I have to.”

“My brother loved you, Cricket, and I think he still does. You’ve had many men who loved you,” Troy said.

I stood there, and then Troy laughed. “Oh, but you love this one back. I get it. So if we were to let them go, what can you promise me?”

“You’ll never hear from them or this stupid casino again, and I’ll do anything you want.”
“Love my brother even when he’s been drinking, and I want to feel the tongue trick my brother has been raving about for eight years straight.”

“Which one is he?” Troy asked.

Troy looked at me and shook his head. “Liar, that one in the white shirt is not your type. I can see you with…I see you with the one in the black sweater.” I stiffened, and Troy opened the refrigerator door.

He untied them from the chairs but still left them tied up as if they were in a chain gang. He pulled Jyme out last just to fuck with me. I pulled Kanoke’s hat off his head, and he shifted, messing up the coordination for the rest of them. I ran right dead smack into Jyme. As soon as our bodies touched, he started sniffing and sniffing like a dog looking for food. I knew he knew something, but I was not sure what. I pulled all of their phones and wallets off the table and put them in Kanoke’s ball cap.

My heels were loud, and Jyme was listening. He kept stopping, and then he would start back up, walking backwards again. I pulled my phone out and texted for Chelle to pull the car up and wait for me to come out. I told her to have the back already opened because they were all tied up and blindfolded.

We finally made it to the top of the stairs, and Troy opened the door. We all walked into the hallway. I wondered where Trey was. He told me he would be right back, but that felt like hours ago. My heels across the floor were so loud, and Jyme’s face twisted and turned from side to side. He absolutely knew something, but hadn’t put the puzzle together yet.
Chelle and Ayashe were waiting by the main gate. My heart was racing, and I knew I was about to lose it. The tears started first, and then I breathed and breathed slowly. The gasping of air caught everyone’s attention, and I could tell Sheen and Loon were scared. Jyme and Kanoke acted as though everything was okay.

I wanted to touch him, feel him, kiss him, and tell him I loved him so much, but I couldn’t . He would find the letter when he got home, and that is all that mattered. I knew all along he was too good for me, but I wanted to live in the bubble so badly that I pretended he was not. I knew we would never have a happily ever after, and I cursed myself for the months we had been apart. I would give anything to go back and fix it. He looked so strong and so confident. I loved him so much and I wished. I just wished.

Troy and I got them loaded up in the back, and I never once touched Jyme. Once they were all in, we shut and locked the hatch. I opened the door and got my three bags out, and Chelle handed me my purse. I handed her the hat with their belongings. I reached into my purse and handed her the stack of money for the plane tickets, my rental car keys, and my Blackberry. She got out and hugged me tight. Ayashe did the same. We were all crying and sniffling and looked a mess now. I mouthed, “I love you: to Ayashe, and she did the same. Chelle stood there, and then she smiled at me.

“I know I won’t ever see you again, and I will miss you. You’re my best friend and I love you,” she cried into my shoulder.

“Take care of him, and tell him I have this,” I pointed down at the ring, and she nodded.
“Don’t take those blindfolds off until you get to the airport; you have to convince him I’m not here,” I told her as I pulled away from her. They both blew me kisses and waved as they pulled off. 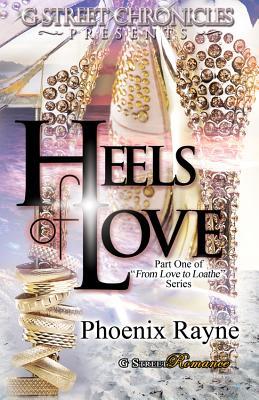 I turned around and set all the bags onto the concrete. I pulled my phone out and slammed it to the ground twice. Then, I dug into it with my Stiletto heel. I left the crumbled up pieces of my phone on the ground and walked away from my current life, stepping back into my old one.

Blurb:
When Cricket Hooper moves to Seattle she only has a couple of goals find a job and an apartment near her friend Chelle, and basically to live a quiet, normal life. However, it isn't long before life becomes far from normal. When a mysterious man helps get her car out of the mud after she makes a wrong turn, she finds herself in his thrall. He wines and dines her, quite literally, and before Cricket can stop it, things are steamy and serious very serious.

Cricket is thrown aback when Jyme turns out to be more than a simple fisherman, but then she isn't telling all of her story either.