I have read a number of mysteries taking place in post-Katrina New Orleans—most notably Tin Roof Blowdown  by James Lee Burke and   Claire de Witt and the City of the Dead by Sara Gran.  Both of these are beautifully written and atmospheric.  Bad Karma in the Big Easy by D. J. Donaldson is not in their league, but it’s full of big issues.  There are issues involving post-Katrina New Orleans, surrogate mothers, organ cloning, violent media and post- traumatic stress for law enforcement. 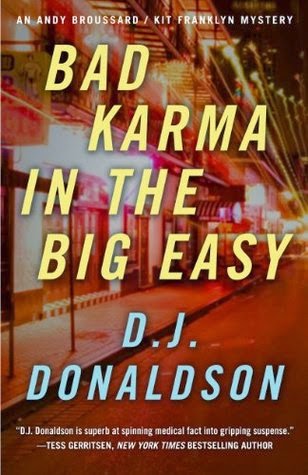 The organ cloning issue is somewhat futuristic as D. J. Donaldson indicates in an author’s note.  For some readers, this sort of technology would present a spiritual problem.   For others, it would be a tremendous advance that would save lives.   I admit that I come down on the side of those who would regard it as beneficial, but I recognize that there is a controversy surrounding it.  See http://www.cloneorgans.com and an article by Alex B. Berezow in the UK magazine Wired World  for  current scientific analysis of the issue.

This is the seventh book in a series centering on forensic pathologist Andy Broussard and expert in criminal psychology Kit Franklyn.  Both are employed by NOPD, and work together.  Broussard examines the corpse, and Franklyn determines whether or not this is a case of homicide.    I have to say that this is the first mystery I’ve read dealing with New Orleans police that portrays them as competent and capable of solving crimes.   Perhaps this is a result of my preference for private investigators.  Traditionally, most mysteries that star PIs portray the police as bunglers.   There is actually a PI in Bad Karma in the Big Easy who is impressive.  So this police procedural doesn’t denigrate PIs despite the fact that PI novels tend to denigrate police.

Kit Franklyn has a problem with post-traumatic stress in this case.  I personally liked the way her PTSD was handled, though not all readers would agree.  I think that it’s important to point out that not everyone responds to PTSD in the same way, and that people recover at different rates.  Some individuals are more resilient than others.   I give D. J.  Donaldson extra points for recognizing that recovering from PTSD is an individual matter.

I could have done without the sequence involving the alligator.  I am not a huge fan of alligators, and would rather not read about them at all.  Those who consider gators local color might rate this aspect of the plot as a big plus.

Although I haven’t previously read D. J. Donaldson before, I would be willing to read more in this series.  I liked the principal characters and I enjoy reading mysteries set in New Orleans.

I received this galley from the publisher in exchange for an honest review.