Interpreting The Case of Anna O. Through Guises of Desire by Hilda Reilly

I encountered author  Hilda Reilly on Goodreads.  When I took a look at what she had written, I was most drawn to Guises of Desire, a novel from the perspective of Bertha Pappenheim. 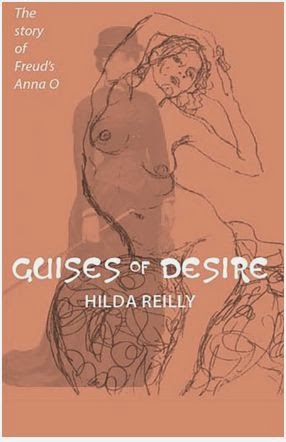 Pappenheim is best known as "Anna O.", the name Dr. Josef Breuer used to protect her identity.  Needless to say, it's now an open secret.  Before reading Reilly's novel, I had read The Story of Anna O. by Lucy Freeman which is now out of print.  Anna O. was the first to use "the talking cure" which is now known to us as psychoanalysis.  Although Sigmund Freud is often thought to be the Father of Psychoanalysis, it was actually Breuer who originated the practice.  Breuer's ideas about Anna O.  appear in Studies on Hysteria which is a collection of cases co-written by Freud and Breuer. The link I have provided will lead readers to the full text version on the Internet Archive.  There you can see for yourself what Breuer had to say about Pappenheim.

Although Breuer was sympathetic and compassionate, he never truly understood Pappenheim. Yet he was the only supportive figure in her life.  This resulted in the first case of the phenomenon known as transference which psychoanalysis interprets in terms of its view of family dynamics, but I think that Pappenheim's psychological dependence on Breuer is a much more believable explanation.

Breuer  abandoned treatment of Pappenheim because he regarded her as incurable, but she went on to become an activist for the protection of trafficked women.  As a member of the Jewish community of Vienna, she was also active on the behalf of Jewish women in crisis.   I consider her an important feminist figure.  In an essay that appears on The Jewish Women's Archive , Marion Kaplan calls Pappenheim  the founder of Jewish feminism.

Hilda Reilly has her own perspective on why Bertha Pappenheim became ill.  Like many current scholars, she believes that there was a physical cause.   I believe that Reilly looked at certain symptoms ( while excluding others) to come to her conclusion without examining the possibility of underlying causes.   It seems to me that it was her family's attitudes that made her ill.  I  consider the short story The Yellow Wallpaper by Charlotte Perkins Gilman highly relevant to Pappenheim's case.  You can read this story on Project Gutenberg by following my link.

The  situations of the central character of "The Yellow Wallpaper" who is a fictionalized version of Charlotte Perkins Gilman herself, and the real Bertha Pappenheim portrayed in Guises of Desire aren't identical, but there are important ideological underpinnings that I believe represent the causes
of mental illness for both of these women.  Silas Weir Mitchell,the highly influential physician who "treated" Gilman, believed that creativity overstrained the minds of women and made them unfit for being wives/mothers which he regarded as the only true vocation for women.   An analysis of the writings of Sigmund Freud would reveal that he believed the same.  It was part of the Victorian zeitgeist.  Mitchell prescribed a "rest cure" for Gilman.  "The Yellow Wallpaper" describes how this alleged cure for creativity, which isolated her from all her sources of sustenance as a writer, drove her insane.  Bertha Pappenheim was a writer as well as an activist.  Her family discouraged her from reading and writing as well as activism for reasons similiar to Silas Weir Mitchell's doctrines.  Virginia Woolf  was subjected to the same sort of therapy and became severely depressed.  In the Wikipedia article  devoted to Mitchell to which I've linked, Virginia Woolf is quoted as excoriating the "rest cure" as the bane of any intellectual woman.  Pappenheim became more "psychotic" when she was isolated from everything that gave her life meaning.  My readings of feminist literary criticism gave me the tools to uncover the links between women writers who were suppressed by the environments in which they lived.

Another problem that Pappenheim had was drug addiction.  In Victorian Vienna, few people were aware that opiates, which were so widely available, could cause hallucinations.  Once she was off the drugs, she no longer hallucinated.

I think that her "absences" were not related to drugs.  These incidents  when she mentally clocked out of interactions, were obvious attempts to escape from her family environment. She also did and said things during "absences" which she couldn't recall later.  This is a symptom of Multiple Personality Disorder (MPD).  MPD is a refusal to acknowledge a part or parts of yourself. In some cases, MPD conceals criminal impulses.  It's also sometimes associated  with abuse. Bertha Pappenheim's mother was doing what she thought was in the best interests of her family.  According to the beliefs of the time, she was not being abusive.  Yet the impact of  her restrictions on her daughter was catastrophic.  It's important to note that she recovered from these symptoms once she established her independence and had "a room of her own" to quote Virginia Woolf.

The symptoms that Bertha Pappenheim displayed seem so bizarre, but  I believe that families where the truth is regarded as unacceptable can cause individuals to express themselves in code.   Pappenheim's  every action and utterance became metaphorical. Her fiction written during this period is also layered with metaphor, symbol and folkloric motifs that I found fascinating.

Pappenheim no longer needed to express herself in code once she was free of her family environment.  Then she could truly become herself.  I feel that Guises of Desire provides all the clues for interpretation of  Pappenheim's symptoms.  Psychoanalysis is one rubric for interpretation.  Feminist analysis is another.  Although I disagree with Reilly's conclusions, I felt that I understood Pappenheim better as a result of reading her book.