Refuse To Forget: A Personalization of War's Devastation


Although Refuse to Forget by John Bishop is the story of 14 year old Harry Butler, I read it because I wanted to know more about Lady Hester who Harry followed to do ambulance duty in Belgium during World War I.  Was Lady Hester a courageous feminist or a thoughtless fool?  In the novel, she is widely regarded as a fool.  I had to ask myself how I felt about her actions. 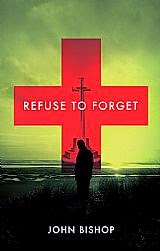 I believe that there are just wars, but all the World War I novels that I’ve ever read have depicted it as a senseless waste that destroyed lives.  The Maisie Dobbs novel,   Birds of a Feather which I reviewed on The Unmasked Persona’s Reviews here  dealt with the concerted effort to denigrate people who were opposed to the war.  In Refuse to Forget, adolescent protagonist Harry Butler literally didn’t know any better. Due to the tide of wartime propaganda, he seemed to sincerely believe that anyone who didn't participate in the war was an inferior human being.

In my view, Lady Hester’s effort could have been motivated very differently.   Her ambulance can be seen as rescuing the victims of the war.  Quakers, whose faith is opposed to wars in general, have been involved in this sort of war service. Find out more in the Wikipedia article, The Friends' Ambulance Unit.  It’s important to point out, however, that the FAS was officially sanctioned while Lady Hester’s ambulance wasn’t sanctioned at all.  It’s clear to me that the reason why Lady Hester didn’t get official support was because of attitudes toward women during this period.   Feminism is definitely a sub-theme in this book.

I consider Refuse to Forget to be a sad commentary on World War I and the society that perpetuated it.  It is well-written and well-characterized.  I just wish that a woman like Lady Hester had been born into an environment where she could have accomplished something significant.  Perhaps John Bishop intends to tell his readers that World War I wasted the potential of both the men and women of that generation.  For me, he was preaching to the choir.  Yet I appreciated his message.