Rhinoceros Summer: The Maturation of a Teen Photographer in Africa


It occurred to me that the central character of Rhinoceros Summer by Jamie Thornton starts off as the mirror image of the central character of another book that I reviewed last year on The Unmasked Persona’s Reviews.  Lydia Gibbs, the aspiring teen photographer in Rhinoceros Summer thinks that going to Africa will be a tremendous career-making opportunity.    Jazz Hooper, the grief stricken teen with no aspirations in The See Through Leopard by Sibel Hodge, resents being uprooted by her father and hates going to Africa.  See my See Through Leopard Review.  Neither girl found what they expected there, but their experiences in Africa were life-changing. 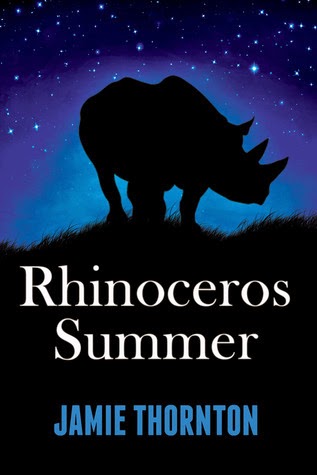 My main criticism of The See Through Leopard about overt didacticism doesn’t hold true for Rhinoceros Summer.  There are certainly ideas in this novel, but no long speeches.  There are thoughts from the characters that give us their perspectives.  Since there are multiple perspectives, I don’t feel that the author is preaching at me.

As the novel opens, Lydia the preacher’s daughter, is working at a Christian supply store.   I wondered at that point whether this book could be considered Christian fiction.  Although Lydia’s parents are portrayed sympathetically, their beliefs are not the only ones that are portrayed in a positive light.  So I wouldn’t consider Rhinoceros Summer Christian fiction.  At one point Lydia gets what she considers a surprising African viewpoint on Christian missionaries.

In The See Through Leopard, Jazz works in a wildlife sanctuary.  She encounters the views of hunters indirectly.  Lydia photographs safaris, so she deals with how hunters think about their activities on a daily basis. Nevertheless, the events of Rhinoceros Summer show me that Jamie Thornton is definitely not sympathetic toward hunters, and does have positive feelings toward those who want to preserve animal species.  It seems to me that Jamie Thornton’s approach has more impact.

I also wanted to comment on the romance aspect in this book.  This is not an ideal relationship.  The characters have flaws, but I also thought they matured over the course of the novel as a result of their experiences.

There is a figure who is mentioned as having been an inspiration to one of the characters.  Reference is made to Ernest Haeckel’s drawings of wildlife, but there is also a remark made by another character about his being in accord with Nazi attitudes.  According to the article about Ernest Haeckel on Wikipedia , he was a pre-Nazi advocate of their doctrines.  It seemed to me that Jamie Thornton was showing us that historical personages who are highly regarded by individuals in our own time may not conform to contemporary standards.

The complexity with which Jamie Thornton approaches her themes, her characters and the African milieu is what makes Rhinoceros Summer an excellent piece of fiction.

I received this e-book for free from the author through a Booklikes giveaway.