Seance in Sepia by Michelle Black

Today Shomeret and I are both sharing our thoughts with you on this title. 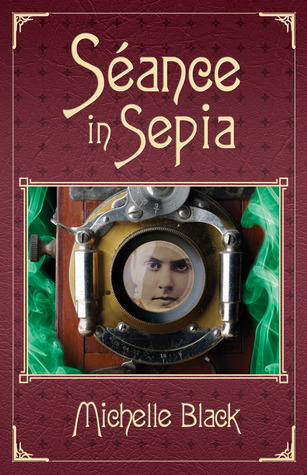 When the price of an unusual picture called a spirit photograph, which some Victorian spiritualists claimed was a photograph of the departed taken during a seance, sells at auction for over a thousand dollars, Flynn Keirnan is determined to discover the story behind it. She soon learns the ghostly images of the woman and two men in the picture were the subjects of a sensational murder trial in 1875 Chicago. A young architect was accused of killing his wife and best friend in what the local press dubbed The Free Love Murders. Flynn tracks the story through many sources, including the trial transcript, a journal kept by one of the victims, and notes from a jailhouse interview with the husband conducted by feminist firebrand Victoria Woodhull for her radical newspaper. Woodhull, also known as a spiritualist, was asked by the accused to contact the spirits of his wife and friend to obtain details about the deaths. Was it a double homicide, a double suicide, or a murder-suicide and, if so, who killed whom? Flynn Keirnan discovers the key to solving the Free Love murders lies in learning the provenance of the photograph itself. When she does she finds that, like Victoria, her own outlook on love has changed.

Shomeret: This is supposed to be a historical mystery with a contemporary story line, but I didn't consider either the history or the mystery adequately handled.

Tara: I actually really liked the mystery. Well, except I confess I grew confused by the time changes. We suddenly went from court transcriptions to jumping back a few months or a year or so before the murder even transpired to jumping forward to Victoria Woodhull after the court events occurred and I was quite jarred at times. I think I just truly love court-room drama and that is what saved this for me. But it did grow confusing.
The contemporary story-line...didn't do much for me. I quickly forgot about the characters as soon as the historical scenes popped up again. When it switched to contemporary, I was like, "Oh, I forgot about these people!" I thought dialogue in the contemporary scenes was well done though--the banter btw characters.

Shomeret: I liked the themes dealt with in this book, but there isn't enough development of the context. I did notice a rather detailed description of 19th century photography techniques which could be fascinating if that interests you. Yet I thought the Oneida Community, which was fairly essential background was given short shrift. Someone who knows nothing about it, wouldn't really understand that it's significant. I would have wanted a flashback.

Tara: I, too, wanted more of that community. It seemed interesting and yet so passing in mention. I wonder if anyone has penned a novel about it?

Also of note are the mentions of Anthony Comstock and Reverend Henry Ward Beecher. I feel like too often in the story, we were teased, having tidbits of fascinating information dangled in front of us but not really followed through on, forcing us instead to browse the Internet for more data. Did you find yourself wanting to know about those men?

Speaking of themes, did you feel there was a strong moral about leading two men along? About self-absorption? Also, of turning a religion or belief to suit your whims--such as Medora using VW's speeches as an excuse to have her rich husband and her poor lover?

I wanted to slap Medora. (Another complaint comes to mind--this woman was called by three different names in the story, confusing me more than once. It was Mrs. This, Miss That, and sometimes her first name. URGH.)

Shomeret: I already know quite a bit about Anthony Comstock and Henry Ward Beecher. This is an area of history that I've studied. Comstock was known for his censorship particularly of birth control information. Henry Ward Beecher was a highly respected preacher, but he is also associated with a scandal regarding his involvement with another man's wife. See the Beecher-Tilton Scandal.


Tara: *embarrassed* I feel ignorant as this is the first I've heard of them and the scandal. Beecher--I've heard his name, never paid much attention.

Shomeret: I also don't think that we should just be told that Victoria Woodhull was a prominent medium. Show her performing a seance. Don't just imply that she was genuine, give us a convincing scene. I love authenticity in my paranormal content.

Tara: Excellent point. I was rather surprised and disappointed that VW does nothing really but talk to the people involved. She doesn't even really investigate. There's no contacting of spirits, no paranormal premonitions, NOTHING. She just listens to people talk. If VW had not actually been involved in this real-life case, there would be no point in using her. She could, I feel, be just any random woman in this book. There isn't enough spiritualism to even say "random spiritualist".
Shomeret: As a huge fan of Victoria Woodhull, I would have loved a series in which she solved mysteries. Yet this book didn' t really do that. There were scenes from the murder trial, but it's like getting only the last half of a Law and Order episode. Where was the investigation?

Tara: I love Law & Order, probably why I enjoyed the transcriptions so much. You are right again about the lack of investigation. Perhaps the book would have been improved with an actual detective having some scenes/a major part of the story? But then I also think their investigation skills were quite poor in the late 1800s. I doubt it would be as interesting as a book with more modern investigative techniques.
Shomeret: Victoria Woodhull was a controversial figure in her time because of her advocacy and practice of what was then called "free love" and "complex marriage". Today practitioners call it "polyamory" and it is still largely considered unacceptable. For further background about Victoria Woodhull and free love, see The Beecher-Tilton Scandal. Yet remember that she was the first woman to sit on the New York Stock Exchange and the first woman to run for President of the United States. She had some tremendous achievements for which she should be respected. Her scandalous personal life isn't the only factor for which she should be judged.

Tara: And you bring me right to why despite my enjoyment for the most part of the story, I'm taking away a solid bike. This takes me back to what I said above, about being teased. This is from the book:
"You and your sister were the lady stockbrokers, weren't you? I remember it now. Quite a splash you made on Wall Street. Vanderbilt was once your client, wasn't here?"

When she wasn't opening the first female-owned brokerage house on Wall Street, or addressing the U.S. Congress on the subject of woman's suffrage, or running her own radical newspaper, she was known to run for presidency of the United States.

There is so much to VW--all the things you mentioned and more. Though I realize these previous accomplishments don't really tie into the murder mystery, I found myself wondering, "Why even put VW in this story if you aren't going to address any of the most interesting and amazing things about her?" As I said above, I felt her character could have been just anyone of that time period. The story didn't really make feel that I was getting to know the Victoria I wanted know--the lady who ran for president and worked on Wall Street...not even her as a spiritualist.

I also feel the book is too short for what it encompasses--two story lines, four different types of scenes...and this prevented us from really getting involved with, getting to know any of the characters deeply enough for them to impact. It just touched on each person so briefly. We would just be getting to know Flynn a tiny bit and suddenly we're back to Cam.

Shomeret: I agree. If the book were longer the contemporary characters and plot line could have been better developed.

Tara: My conclusion: I liked it for the most part, wasn't bored and didn't find myself skimming. I was actually torn between a three and a four until I reached the end and then I said, "What the hell is with the David Halloway and Brody thing? Who cares about a past dalliance of this woman we barely know? It added NOTHING to the story. That made it a three for me. Shomeret?

Shomeret is an aspiring writer who loves all things historical and quality fiction that is original in some way. She inhabits the borderland called liminality by anthropologists. She rides a leopard in her imagination.

If you love her review, you can find more of them on her blog or follow her on Goodreads.