She Likes it Rough #Giveaway & Review

Can daring adventures with an adrenaline junkie give a daydreaming pushover the courage she needs in order to make her life count for something?

When a freak fast-food accident almost kills scaredy-cat Lisa Flyte, she decides it's time to get a backbone and really start living life! But how is a shrinking violet like Lisa supposed to get assertive all of a sudden after a lifetime of watching from the couch?


Jack Hawkins, that's how. When Lisa finds out that the outdoor extremist from her MBA classes needs a clueless urbanite to test his top-secret line of adventure gear for beginners, she gets the most outlandish idea of her life: she will be his undercover test dummy if he helps her become brave on their adventures in the wild.

They strike a deal. But can Lisa use her outdoor moxie to become the alpha hero of her everyday life? Will she find the grit to pursue a career she really wants or the nerve to stand up to her bullying family?

And will she get gutsy enough to go after Jack? He's a man who's not afraid of anything...except maybe of falling for Lisa.

My Review:
This story did indeed have its funny spots, as I'd hoped. I literally laughed out loud when Lisa tore Jack's pants off by accident on a mountain..and there were others spots that had me cracking up.

What I liked the most about this story though is the theme about bravery. Frankly, I felt Lisa was brave all along--and stupid at times--even before she began this adventure quest. You don't have to throw yourself out of airplanes to be brave. Facing the public after what they all read about her, trying to live her life, even approaching others like Jack and Heya takes some bravery. But the heroine has to realize that and see she had a brave girl in her all along. 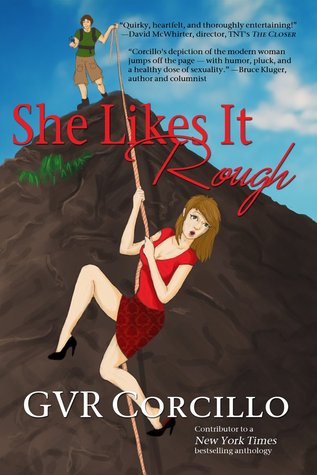 Between her and Jack, we see different kinds of cowardism and how easy it is to point out another's flaw whilst ignoring your own.

-I rarely say this, but I think this story could have been improved with the hero's POV in it. It was impossible to tell what was going on with Jack, what he thought, felt, intended. Impossible.

-The heroine is supposed to be 34 but comes across as a teenager. I mean, who thinks it's cool when a man kicks your door down?

-The book was filled with metaphors referring to movies or TV or people I've never heard of. While I don't live under a rock, I haven't seen every movie in existence and there were a ton that I had no clue what they referred to, such as:

I want to be cool, when what I want to do is scream and jump like Fran does when Scott tells her he wants to do dance with her at the Pan Pacifics.

Donna Reed's bathroom is hardly the best place to prepare for diving into shark-infested waters. Who is Donna Reed?

Like the bond that develops between Nicholas Cage and Shirley MacLaine in Guarding Tess.

I stare and swallow like Anna Paquin winning her Oscar.

...hugging the dog like Diane Keaton hugs Warren Beatty toward the end of Reds.

And the heroine doesn't even watch any movies, so what gives? Is it just assumed we'll know what she's talking about? While I know who some of the above-mentioned famous people are, I haven't seen all their movies so these metaphors just left me irritated.

And what's with the unprotected sex? There's brave and there's stupid. They have random sex twice and suddenly decide to use protection the third time.

I received this from Reading Addiction Virtual Tours.

GVR Corcillo’s debut chick lit novel, She Likes It Rough, was awarded Best Indie Book of 2013 by the Rebecca’s Reads Choice Awards. The romantic comedy also took first place in the Humor category. RebeccasReads.com established the awards program to pay tribute to authors who are self-published or have had their books published by a subsidy publisher, small press, university press, or independent book publisher.

With her Ivy League education, white trash sensibility, and pop culture savvy, GVR Corcillo delights in writing chick lit about characters who try not to trip as they valiantly march to their own bongo beat.

She didn't start writing right away. First, she worked in a greenhouse, a supermarket, a movie theatre, a potpourri-stuffing factory, an electrical fixtures plant, a book warehouse, a metal-perforating factory, a video store, several movie studios, a children's museum, a radio station, and a bar. She also taught high school in Watts and South Central Los Angeles.

But none of these fit the bill for what she always wanted to be when she grew up - a writer. So, she won some writing contests, hit the New York Times Bestsellers List with her first short story, and got a screenplay produced.

Geralyn Vivian Ruane Corcillo, a native of Scranton, Pennsylvania, lives in North Hollywood with her husband Ron, a television comedy writer. They are both New York Giants fans.