From A High Tower: The American Wild West German Style

From a High Tower by Mercedes Lackey is the latest in her Elemental Masters series.  The original premise of the series is that these would be  fairy tale re-tellings taking place in the 19th century  starring mages with elemental gifts.  This is the second volume in this series that takes place in Germany.  Giselle,  the protagonist of the book, is an Air mage who begins as a version of Rapunzel.

So let me tell you about some more interesting aspects of this Elemental Masters book that relate to feminism and popular culture. 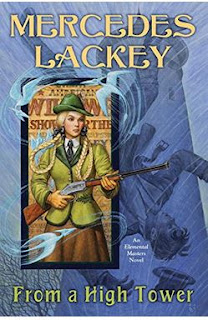 The re-telling of Rapunzel is a narrative frame that is fully woven in the opening of the novel.  This is really a book about an Air mage who uses her gifts to earn a living as a sharpshooter.  She eventually joins a Wild West show that is touring Germany.  There are two perspectives to take on this character.  One is that Giselle is an unethical fraud who is only pretending to be the equal of  the real historical sharpshooter Annie Oakley. ( Annie Oakley is mentioned in From a High Tower.  She was also touring Germany in Buffalo Bill's Wild West show.)  The second is that Giselle is a feminist hero.  She is a resourceful survivor who has found a really cool way to utilize her magical abilities.  Do the ends justify the means?  I will allow readers to make their own decisions about Giselle.

What interested me most about this novel is that Lackey portrays German perceptions of the American Wild West as being drastically different from American perceptions.  Germans have been influenced by the works of the 19th century bestselling German author,  Karl May.   I have chosen to link to an English page on the Karl May Society website because it discusses why this author is regarded as important.   I had heard of Karl May, but had never read his books or understood their appeal before reading From a High Tower.  Like many other Americans , I had dismissed Karl May as inauthentic.

Popular culture is steeped in legend.   Each nation is very attached to the way their popular culture portrays the individuals who are regarded as key figures.  American popular culture about the 19th century American West, which is still known as the Wild West, is no more authentic than the German version created by a single author.    Lackey presents the American Wild West show performers with a dilemma.  Their rendition of  the Wild West didn't connect with the German audience.  They wanted to see a  dramatization of  a scenario out of the works of Karl May, and their expectations were being disappointed.

Why should this culture clash matter to 21st century readers?  The most important issue was the portrayal of Native Americans.   Should they be heroes or villains in a Wild West show?  Karl May's novels depict Native Americans as heroes.  In the U.S. of the 19th century such a scenario would never be seen.  As a 21st century reader, I might consider Karl May's view romanticized, but the universal villainization of  Native Americans that occurred in U.S. Wild West shows during that period is totally unacceptable to me.   So I was on the side of the German audience and the Native American performers who deserved better than to be depicted as hateful caricatures.

This is noteworthy because Germans are now so often associated with Nazism which regarded all non-whites as inferior and degenerate.  In From a High Tower, Lackey depicts Germans in opposition to American racism in the century before the rise of the Nazi movement.

So Mercedes Lackey's tale is primarily about abandoning stereotypes.   I just wish that she could also have also broken the mold of Hansel and Gretel.  We need to grow beyond demonizing anyone.