When I reviewed the Jewell Parker Rhodes children's fantasy Bayou Magic recently  here, I said that I wanted to catch up on novels by Rhodes that I hadn't read.  That included this final book in her contemporary mystery trilogy about Dr. Marie Levant, a physician descended from Voodoo priestess Marie Lavaux.  Levant became a Voodoo priestess herself after re-locating to New Orleans.

As readers might expect Hurricane deals with Hurricane Katrina, but not a description of NOLA's experience of Katrina.  Rhodes doesn't even reveal the post-Katrina fate of Charity Hospital where Dr. Levant worked. I personally discovered what happened to Charity Hospital while watching a Book TV discussion on C-SPAN 2 on We're Still Here Ya Bastards, a non-fiction book by Roberta Brandes Gratz about NOLA's recovery.  If you're interested, you can read Gratz's article on Charity Hospital which appeared in The Nation here.

Now it's time to begin the review of what Hurricane did include. 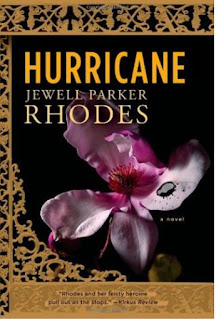 It starts with Marie Levant discovering an entire family murdered in their home outside the small fictional African American community of Delaire.   When she reports the crime in NOLA, no action is taken.  So she decides to investigate herself and discovers that the case is much larger than she ever imagined.   I was exposed to some very sad information that I can't unlearn now about the tragedy of environmental degradation in the Mississippi Delta that didn't begin with the Deepwater Horizon disaster.  This is a novel about real life horror and monsters that do exist.  Similar environmental atrocities can and do happen anywhere.

Delaire also had a Hoodoo woman known as Nana who was a visionary and a healer.  She had seen that Marie was coming to Delaire.  Dr. Levant was expected to be their savior, but addressing symptoms without any knowledge of the underlying cause is not really healing.  In fact, it can be a terrible mistake.

Marie recognized one of the spirits that Nana worked with.  She was Mami Wata, the mermaid goddess from West Africa who I encountered in Rhodes' Bayou Magic.  As a nature spirit, the interests of Mami Wata did not necessarily coincide with those of humans.  This was a spiritual lesson that Marie Levant needed to learn while Katrina descended on her city.

I've said a great deal about the themes of Hurricane and their implications in this review, but I don't think I can convey the brilliance of this book.  Readers must experience the hard truths that Hurricane uncovers for themselves.