If  you enjoy the television series Once Upon A Time,  Alice Takes Back Wonderland by David D. Hammons will have a very similar vibe.  Characters from  Wonderland, Neverland and the realm known in this book as Grimm are all mashed together quite delightfully.   I received a free copy in advance of publication from Curiosity Quills, the publisher, in return for this review. 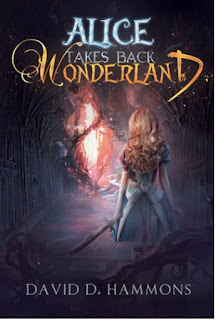 Hammons' premise is that authors such as Lewis Carroll, James Barrie or the Grimm brothers are receiving echoes from other realities. Echoes aren't the same as accurate descriptions. The "real" stories are quite different.

Literary mashups are usually considered as the equivalent of stunt-casting for fans of the characters involved who want to know what would happen if they met.  It's akin to fanfic,  and is based on the same playful impulse. This novel is for those fans, but is also much more.

Hammons is seriously posing the question of why people want to escape through fiction.  The general assumption is that the audience for escapist literature are people who are bored by humdrum lives, but some people like the Alice in this novel (who starts out in our contemporary world) lead lives that feel like prisons.   Escapist fiction gives them hope.  It allows them to imagine that their lives could be better.

Yet what if  even your ability to dream of a better future were somehow removed? In Alice Takes Back Wonderland, Alice discovers that a dictator who has seized power in Wonderland is "taking the wonder" out of people.  This actually parallels Alice's 21st century experience.  Well-meaning adults were trying to remove her capacity to perceive other realities through modern medicine.  So Alice's battle to restore Wonderland is a war on behalf of imagination against those who consider imagination dangerous.   At one point the iconic Cheshire Cat declares "You call us mad for acting free."  Without imagination, there can be no freedom.

At first, I had an ambivalent reaction to the HEA ending because it appeared to eliminate all possibility of a sequel.   Yet it eventually occurred to me that if Alice was going to keep her happiness, she would have to fight for it.   All HEA endings are really provisional.