As we celebrate Halloween, readers might want to recall an iconic gathering at Villa Diodati in Switzerland for the purpose of reading spooky stories.  Two literary luminaries, Lord Byron and Mary's future husband, Percy Bysshe Shelley, were participants.  Another contributor to the evening's entertainment who is not so well known was Byron's physician, John Polidori.  That night isn't remembered for what Byron and Shelley wrote for that occasion.  Nor is it remembered for what Polidori  wrote, though perhaps it should be. His novel The Vampyre that emerged from that dusk assemblage is a landmark work for those who are interested in the history of vampire fiction.  Yet that confluence of creativity draws people's interest because Mary Shelley first imagined the book that became Frankenstein.   Suzanne Burdon opens her Mary Shelley novel, Almost Invincible, with a re-creation of that remarkable evening.

A while back I  reviewed The Lady and Her Monsters on my old blog.  It was a non-fictional history of the literary and scientific background behind Frankenstein.  So Almost Invincible is not the first book dealing with Mary Shelley that I've blogged.  It's a biographical novel that focuses on her marriage, but I thought it was appropriate to begin this Halloween review with a mention of Mary Shelley's best known work. 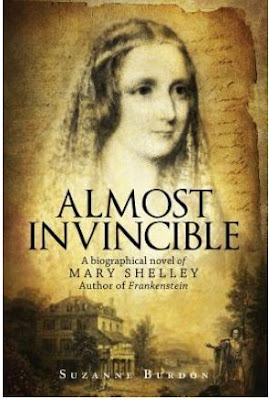 After reading Almost Invincible,  I've come to the conclusion that Mary Shelley was truly caught betwixt and between her heritage as the daughter of the radical and unconventional Mary Wollstonecraft and her upbringing in the Godwin household run by the second Mrs. Godwin, Mary Jane Clairmont, who was obsessed with respectability.   Mary ran off with Shelley, who was then a married man, but she worried about the scandal that ensued.  At one point, she complained to Shelley that his metaphorical umbrella that protected him from malicious talk didn't  shield her. It seems to me that if Mary wanted to share his metaphorical umbrella, she needed to shelter under it.    Shelley's protection was a mindset that the opinions of conventional people didn't matter to him. Stepping under his umbrella would mean that Mary would have to adopt that mindset, and she seemed incapable of doing so.   The only explanation is that Mrs. Clairmont-Godwin had influenced Mary far more than she had managed to influence her own daughter, Claire.   Mary recognized that her father,  philosopher William Godwin, had become a hypocrite who no longer supported the social radicalism that he advocated when he and Mary Wollstonecraft were a couple.  Yet she didn't perceive that she was equally inconsistent.

The title of the novel is taken from Godwin's evaluation of his daughter, but Mary was by no means invincible.  She was hurt by Claire who she viewed as a rival for Shelley's affection, and she was very wounded by the deaths of all her children except for Percy.   In fact, I thought that Claire was far more resilient because she lacked Mary's emotional sensitivity. Claire was unsympathetic, but I thought she was stronger than Mary.  Claire's response to loss was anger.  She refused to  completely surrender herself to grief, and was able to move on with her life.

What I liked most about this book were the references to what was happening during the period. For example,  in Villa Diodati Byron and Shelley discussed the increasing unrest due to serious climate change.   It was known as "The Year Without a Summer" which was caused by a volcano eruption in Indonesia in 1815.  There is an excellent article about it here by Gillen D'Arcy-Wood.  It includes descriptions of the uncanny weather that Mary wrote in correspondence with her half-sister Fanny Imlay.  These reports of  extreme climate in 1816 eventually found their way into Frankenstein.

Another compelling example of historical context in this novel occurred when Mary, Shelley and Claire traveled through France in 1814. Burdon describes the devastation and misery of the Russian invasion and occupation that had taken place at that time. For more information, see an article about it on the Napoleon Society website here.

So although the main focus of Almost Invincible was on Mary's relationship with Shelley, Burdon did provide a frame of reference which shows us the truth of their times.