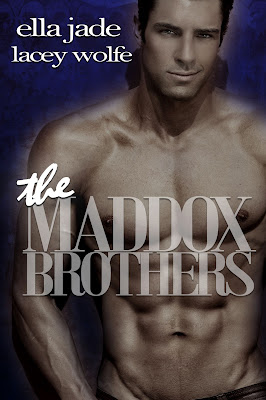 Ella Jade and Lacey Wolfe are excited to announce their joint venture. Each author took one brother and wrote a steamy story to tantalize and entice your senses. The Maddox Brothers is told in two parts, but both books intertwine to give you double the pleasure. Ella and Lacey are bringing you something completely different!

Get lucky with the Maddox Brothers...

Successful brothers Hudson and Liam Maddox are living the lives they’ve always dreamed of. Neither is looking for a relationship, more interested in keeping their single status with the ladies. That all changes when Kennedy and Chelsea enter their lives.

Hudson
Hudson has been focusing on his career and building a solid business in the real estate industry. The charismatic attorney has recently been named the most eligible bachelor in town. He's never been interested in settling down until he collides with the easygoing Kennedy. She invades his orderly life in a matter of days. Has this carefree younger woman been what's missing in his meticulous world?

Liam
Content with his life, Liam has built his own construction business and takes pride from it's excellent reputation. After having his heart broken years ago, he’s decided not to take any relationship too seriously. But then the woman who tore his heart up years ago returns and hires his company for her home renovations. Trying to keep his cool around Chelsea is damn near impossible. All he has to do is complete the renovation and then never see Chelsea again. As if it was that simple.

Have you joined The Maddox Brothers celebration event scheduled for November 15, 2015? Lots of prizes, teasers, excerpts and awesome authors are planned.

Support our Thunderclap too!

https://www.thunderclap.it/projects/32762-the-maddox-brothers
Posted by Unknown at 9:30 AM