I accepted a free copy of Tsura by Heather Anastasiu for review from the author because the central character is a  Romani woman.  Romani are what the gypsies call themselves.  I've read a number of books about  Romani  history and a couple of anthropology studies about Romani in the United States.  I've also read some Romani memoirs, and a great many novels dealing with Romani.  So you might say I'm interested in the subject. 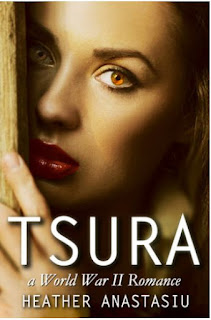 I admit to being somewhat disappointed about the extent of Romani cultural content in Tsura.  There was a slight Romani flavor sprinkled throughout Tsura, but ideally I would have liked to see a great deal more.   The plot line justification for there being so little Romani content is that Tsura was exiled from the Romani community for reasons that are huge spoilers.  Based on my reading and what I heard from a part-Romani acquaintance, Tsura probably wouldn't have ever been part of the Romani community because her grandmother was non-Romani.  Romani have a very strong sense of purity and the non-Romani grandmother would have brought about the exile of her grandparents. Her family would have been part of the non-Romani world for three generations.  They would have needed to make a strong effort to preserve their Romani culture in isolation from their community.  They might have forgotten some traditions and this would have impacted Tsura's ability to live like a Romani woman.

When the novel opens Tsura is in hiding with her Jewish lover who was calling himself Andrei.   She believed that she had a future with him and was prepared to convert to Judaism.  If so, she really needed to change her own name.  Tsura is very similar to the Yiddish word for trouble.  The plural form is much more familiar.  It's tsuris.   I can just see Andrei introducing her as Tsura around the Jewish community.  The response would be "Oy vey!  We don't have enough tsuris already?"  Yeah, that would go over really well.

So why were Andrei and Tsura hiding? Tsura  takes place in Romania in World War II.  Some years ago I had read a Holocaust memoir about a Jewish woman from Poland who took refuge with relatives in Romania in World War II, and was therefore safe from the Nazis. Yet I knew that there were Romanian Jews who were sent to concentration camps.  I was confused.  Why were some Romanian Jews safe from the Nazis while others weren't?

Tsura finally answered this question.  Northern Transylvania was annexed by Hungary as a result of The Second Vienna Award in 1941.  The Axis Powers essentially gave this land to Hungary.  As a result, its Jews were no longer under the protection of Romanian Marshall Antonescu  who refused to cooperate with the Nazi Final Solution when it came to the Old Kingdom's Jews.  These were the Jews who lived in the original territory of Romania.  He regarded them as Romanians.  Marshall Ion Antonescu was no angel.  He should not be nominated for a humanitarian award.  He was responsible for the deaths of Jews who had joined the Red Army.  This was known as the Odessa Massacre. Antonescu was a Romanian nationalist and extremely anti-communist.  He was executed in 1946 for the Odessa Massacre and other war crimes.  I'd like to thank Heather Anastasiu for helping me to understand Romania's role in World War II a little better.

On the other hand, I had a problem with the way the Jewish Holocaust was portrayed in this book.  Something occurred that could never have happened.  I can't discuss it specifically because that would be a significant spoiler, but it undermined the believability of this book for me.  There is another aspect to this problem that I can't even mention in order to avoid spoilers, but my knowledge of this other area combined with my knowledge of concentration camps caused me to realize that this plot event was an impossibility. I will probably discuss it in the Goodreads version of this review because spoilers can be hidden on Goodreads.

So far I haven't discussed what I thought of the romance factor in Tsura which would be the most important component for those readers who chose to read this book because it's a romance.  Well, it's a delayed HEA situation.  There's a sequel and the relationship issues are presumably resolved over the course of that narrative.  I wouldn't read the sequel for that reason myself, though I did like the romance hero very much.  Tsura's difficulties with understanding him in this first book irritated me, and caused me to be impatient with her throughout the novel.