I've been a fan of the Faye Longchamp mysteries by Mary Anna Evans for some time, but I've never blogged about any of them. This is the ninth book in the series.  So it's about time that I did. These are contemporary mysteries that often have a strong historical element.

I think that Book Babe readers who haven't encountered Faye Longchamp should know about her.   Faye is an African American archaeologist who first practiced archaeology by excavating Joyeuse, the island off the coast of Florida where she lived.  By excavating on Joyeuse, she was uncovering her own family's heritage.  Her family had lived on Joyeuse for generations.  Isolation deals very directly with one of Faye's ancestors. 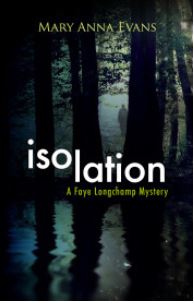 It starts out as a contemporary case.  A woman who owns a bar has been murdered.  At the same time, a man that is looking for the truth about a Civil War ancestor of his who disappeared, starts asking questions about a woman who was Faye's ancestor.   This particular ancestor is significant to Faye.  So that's when this mystery starts getting very personal.   Faye discovers that everything she loves may be in jeopardy.  She will end up having to fight for her family, and for her life on Joyeuse.   Books don't get more dramatically intense than this.  Mary Anna Evans pulled out all the stops in Isolation.

The strength Faye exhibits is more astonishing because the novel opens with Faye having been depressed for some time over a miscarriage.   She isolates herself while she grieves over the loss of her baby.   The level of threat that she experiences over the course of the narrative, snaps her out of it.   She becomes herself again.  A woman who is weak would have no resources to call upon, but Faye is a hero.

One of male heroes in this novel who fights alongside Faye is her husband, Joe Mantooth.  Joe is a Native American flintnapper.  Flintnapping is a stone age skill.   Very few people in the current day practice flintnapping.  He is also an expert consultant on flintnapped artifacts for archaeologists.  I think this makes him a pretty amazing man.  Flintnapping doesn't play a role in Isolation, but I wanted to introduce readers of this review to Joe.  He's central to both this book and to Faye's life.  I always imagine that Joe looks like the actor Joe Lando as he appeared on the TV show, Dr. Quinn: Medicine Woman where he played the role of Sully.   I imagine that Faye looks like the actress  Halle Berry.   Faye and Joe make an extraordinary couple.

It would be possible to read Isolation without reading the rest of the Faye Longchamp series, but you would probably be better off getting all the background by starting off with the first book, Artifacts.  Live through Faye's adventures as Mary Anna Evans wrote them.