Once, Two Islands by Dawn Garisch 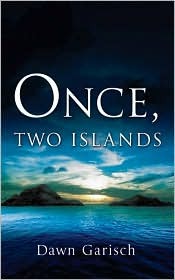 This has been an intriguing look at secluded island life.. Ergo Island is a fictional island in the South Atlantic sea. It has a very small population, one doctor, a mayor, a police officer, and no school past junior high. It's also tore between old traditions of the ancestors (witchcraft) and modern day technology (a doctor from the mainland.)


No one is more tore than Gulai. Her mother died just four days after birthing her and she was nursed by the local "witch" against her father's wishes.. Her father is the doctor I mentioned above.. Gulai is forced to adhere to her father's way of thinking, but something keeps drawing her back to the witch's cottage (abandoned) and the island a ways away that the witch was exiled too. Then the witch's son comes to live on Ergo....


All the while, Gulai battles with inner guilt as she blames herself for her mother's death. "The world without her would have been a better place. Without her, her mother would have lived and her father would've been happy."


There's a story behind the "witch's" exile and after her exile, things start going wrong on the island (from deaths to politics to earthquakes) and Gulai grows up in the middle of it. She's a very likable character as she has normal growing pains (EXCEPT for her dad giving her a pelvic exam... not normal!) and puppy love in an abnormal place, a place where it's considered acceptable to marry at seventeen and no one frowns on Gulai's dad making her forgo school on the mainland to stay home and take care of him.


The story unfolds at a good pace, slowly revealing shocking secrets, leading to a surprising ending.. I am not going to reveal any more.


Laugh out loud moment: "The earthquake resulted in little structural damage, except to the mayor's back fender when it came suddenly to rest against a boulder, and to a wall of Jojo's outhouse, which collapsed while he was busy in it. Thus is was that history would remember this as the day the mayor drove over himself, and that Jojo, horribly exposed and the survivor of a near-miss, contracted sudden performance anxiety and thereby constipation; he too ended up at the hospital in need of help."


This island is based on a real island, Tristan da Cunha. ﻿ 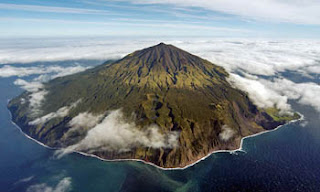 With a population of only 263, it's said to the most uninhabited place on Earth. They did not get television until 2001. The people that reside there are said to all be descended from 15 original people. They have one school teaching children ages five to sixteen. They depend on fishing and there is no airplane access. One must arrive and depart strictly be sea. To view more about this place, check out this website: http://www.tristandc.com/.


The book had a rough start. I almost discarded it in disgust especially when the crazy redhead started suckling the witch's breasts... WTH? However, I stuck with it, got adjusted to the slightly different writing style and in the end, enjoyed the story as I was sucked into the intrigue of island life and its people's unique stories.


Four stars. I got this from the publisher.