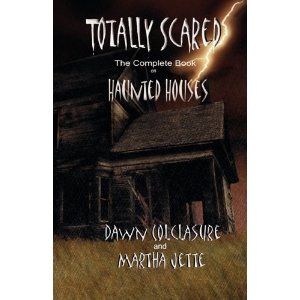 This book had me totally scared. No joke. One night as I was reading this in bed, I got to the pictures of ghostly orbs and began reading about Dan Guthrie's demon ghost and I got scared. I had to set the book aside for fear that it would give me nightmares..

Two words come to mind as I attempt to describe this book. Spine-tingling and informative. Don't believe me? Ask my husband. The entire time I was reading this book, I was turning to him and either telling him about the Winchester Mansion or making spooky ghost noises or repeating the Lizzie Borden chant and adding my own evil laughter.

Obviously, I really enjoyed it...

I am going to recap some of the things that fascinated me.

There is a haunted painting of an octagonal house. Bought in an antique shop, a woman named Meena Svara took it home (a previous buyer freaked out so bad he had returned it to the store packaged in layers and layers of covering) and the painting would move from from horizontal to sideways (unaided) and scared Meena's cat. It also had a "cloud-like black shadow" pass across it and envelope it entirely before disappearing. Meena also swears she seen figures moving back and forth across the windows in the painting. Her cats even pawed at the windows. "She has also seen faces at the windows and changes to the house and grounds." There's much more about this painting and I was intrigued by all the data about it.

A girl named Pamela was accidentally pushed by her father down the stairs of a house in 1930, Ontario. She died. Her ghost began to haunt recent inhabitants of the home and an Ouija Board got some answers. She led the current residents and ghost investigators to the attic where they found a locket with her parents' pictures in it wrapped in a newspaper from 1930. With the locket returned to her, the nine year old agreed to move on to the next world. 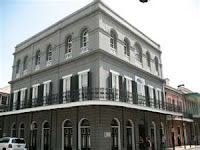 Reading about LaLaurie House in New Orleans had me gasping with shock. The atrocities committed there on slaves were appalling. In 1834, it was discovered that the mistress of the house was keeping slaves chained to a wall and committing "medical experiements" on them. "One woman, for example, had both arms and legs cut off with patches of skin in a circular motion dotting her body.. Another had her mouth sewed shut with animal feces inside."

I could go on but it's really pretty gruesome. It's no wonder that place is said to be haunted.

Winchester Mansion in San Jose, CA was built by the widowed Sarah Winchester. Her husband was the son of Oliver Winchester, owner of Winchester Repeating Arms Company. Sarah was supposedly haunted by spirits who had been killed by Winchester rifles. When he husband died, leaving her 50% ownership of the company and an income of $1000 dollars a day (in 1880!!!), she used it to build a home for 38 consecutive years straight. A medium told her to build a house for the spirits and as long as she continued building, she would never die. The house stands today with 60 rooms, 47 fireplaces, 10,000 windowpanes, and three elevators. There's more to this too..

Even the younger George Bush has seen a ghost! In the White House!

In the Hollywood section, I was surprised to learn that George Clooney hired a psychic to help him contact his deceased but very loved 300 pound pot belly pig.


Nevertheless, there's no end to the interesting or spooky stuff in this book. I'm glad one of the authors, Dawn Colclasure, contacted me about reading this and sent me a copy. I never would have heard of it otherwise and I was on the edge of my seat throughout the reading of it.

Highly recommended, but not before bed! 5 stars.