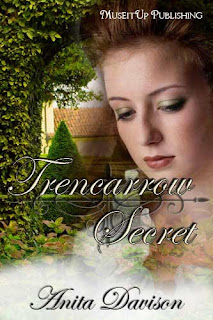 Trencarrow Secret is a Victorian novel about family relationships, growing up, and marriage. Isabel is a young woman vacationing with her family for the summer. She discovers her father in a questionable situation with her ailing mother's nurse. This brings up numerous questions for Isabel. She discovers her parents had a marriage on convenience. Is she willing to marry Jared (which is expected of her) for the same reason or does she wish to find love? Should she find love, will she have the courage to pursue it? And can she forgive her father for betraying her mother?

The story rarely leaves the summer household, but rather than feeling confined, I was intrigued by the family and their scandals, personalities, and witty remarks at the dinner table. Jared is a pompous arse and has something up his sleeve. Laura is infatuated with a young man and means to have him by any means necessary. Aunt Margot is just Aunt Margot and she made me laugh. Amelia is battling her love for a married man. Ashton is feeling guilty about Amelia. Evaline is frothing at the mouth for Henry who really desires Isabel. And Isabel.. is too blind to see it. There is much miscommunication and minunderstandings fly left and right.

Very slowly, however, Isabel grows up. She begins to come to the conclusion, "marriage isn't about weddings and announcements in the papers." The question is: what is she going to do about it? Jared thinks they are to wed and she thinks Henry wants Evaline. Can all the misunderstandings be corrected before she makes a dour mistake?

Favorite quote: When Henry is speaking to Isabel about her fears (she is terrified of both water and a maze) he says, "You aren't the only one who has demons to fight. The mistake we often make is to believe we have to battle them alone."
Great book and I was thoroughly entertained. When I first read it, it had not been through final edits and I complained that the heroine was not feisty enough. However, I later received some additional scenes that had me thinking, "I see a timid girl, but I also see the woman she will grow to be." The changes made, the glimpse into the woman Isabel will become, and the surprise ending make me give this a five.