Pink Boots and a Machete, My Journey from NFL Cheerleader to National Geographic Explorer by Mireya Mayor 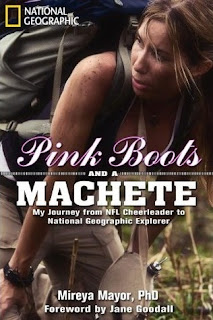 I'm pleased to feature this book here for many reasons. 1. This is a about a STRONG, independent woman that I think we can all learn something from. 2. She's LATINA! 3. It's also about animals.

Mireya takes us on  a journey from her Cuban roots in Miami to her brief stint as a Miami Dolphins cheerleader to the jungle of a Madagascar and so on. She also touches briefly on how having a "pretty face" has made it difficult for her to be taken seriously, how she had to work harder. It paid off for her. She became Nat Geo's first female wildlife correspondent.

And if you need more proof that she's more than a former cheerleader/pretty face, read this book! She travels to South America and the Congo both and braves worms in her feet, scorpion bites, killer bee stings, cock roaches in her pants, possible gorilla attacks, blood infections, and all for the love of monkeys.

This woman also discovered the tiniest lemur in the world (2 ounces), got in the ocean with a killer shark and caught a 70 lb giant "red devil" squid.

Besides fascinating information about the rare and almost extinct lemurs she searches down in the rain forests and jungles to study, the book contains some other tidbits that I found really interesting and I want to share them.

Cassava is the Amerindian staple diet. While living amongst villagers in South American seeking out a rare species of monkey, Mireya participates in some fascinating meal making. Cassava "has a high level of toxic cyanogenic glycosides, a pure 40 milligram dost of which can kill a cow. Improper preparation of cassava can cause neurological disease." To release the toxins before cooking, it is soaked in water for several days but the enzymes in saliva further the process. Thus, the people spit in the food while they cook it. Mireya is a brave woman!!

This "cat" is called a fossa (pronounced foosa) and is native to Madagascar. Mireya has no love for them because they eat her prized lemurs, but she shares a fascinating fact about them. "What gets scientists' attention is the fossa's penis. An adult fossa is about 3.5 feet long and has a penis of about 7 inches, a sixth of its body length. If a man had the same ratio, he would be 3 feet tall and very smug."

LOL. I had to share that. This woman has a sense of humor. I had to tell all the fellows at work about this cat...

Lemurs are the creature of choice for Mireya. This is sifaka lemur, one that she talks about in the book. This excerpt is about lemurs in general, however. And this I thought was really cool. "Lemurs are female dominant. Male lemurs have it rough. They are booted out of the best sleeping sites, displaced from preferred feeding trees, and as a general rule, made to feel useless and inferior."


And not trying to be offensive here...(I did manage to refrain from posting a picture of one.. he he he) but this was too funny not to share. Tampons make excellent fire starters while trekking thru the rainforest where everything, from your gear to the surrounding timber is damp. Whoda thunk it?

Terrific memoir. There's really so much more to it, but I risk making this review far too long. Particularily of interest was the way gorilla's live a "soap opera" life with teenage gorillas angering their dads and the females often leaving the males.

Favorite quote: "I want to set the example my mother set for me: a strong female role model, who faces challenges, takes risks, and conquers fears. I want my children to know that as women, they can do whatever they dream, as long as they believe in themselves."

I highly recommend this for anyone that admires strong women and has a love of animals. I received this from the publisher, but I honestly believe it's a 5 star read. I was never bored!