I am part of a special virtual blog tour, Master Koda Virtual Blog Tour to be exact. See that pretty gold box to the side. Today is the first day of posts, and I'm pleased to announce that I am hosting the lovely Catrina Taylor. Today, she is talking to us about what inspired her to write. And trust me, it's very inspiring and emotional.

When I was a child I found fantasy enjoyable. I created an entire second life for myself in my mind, and when I could, I'd tell my stories to others. Weaving the web was easy, unweaving it I found more of a challenge. By the time I reached eighth grade, I learned to weave that other world on paper. It was the most freeing and amazing thing I have ever experienced. After being selected by a teacher for a writing class with a well known author, I found that this is what I wanted to do, create.

In time, over the years, life crept up. I married by the time I was twenty two. Ten years later, after a beating, and after being told repeatedly the things that drove me passionately, were meaningless, I found the motivation and need to exit the marriage. My son, who has aspergers syndrome, was being mistreated by his father because of his behavior. I couldn't watch this continue, so I made arrangements and my children and I got out. I had lost my creative spirit during the painful marriage, but I never lost my desire to create.

The year I left, I finally started to rework a manuscript I had begun in 2003. On our anniversary in 2011, after spending more than a year learning about the industry and writing the book, book one was finally finished.  Birth of an Empire is not the same book I started in 2003. To the contrary, it is set 500 years prior to the book I began in 2003, but it is my greatest personal achievement. The accomplishment was the single most freeing an enjoyable experience I have had in my adult life. On that day, I told the man who held me back that he no longer had a hold of me. I accomplished that which I enjoyed and I will never again put down my creative spirit for anyone. 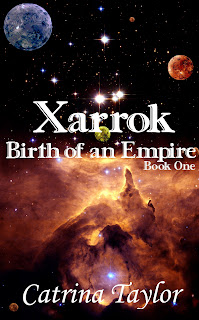 My children drive me every day by inspiring me, teaching me and helping me remember that creativity starts in the young at heart. I make it my goal to find that daily, even if only for fleeting moments. I know as I continue to work toward my dream and goal, my children learn that their excitement and passions matter and they can achieve great things. Writing has become a blessing for us all.

~ About Catrina ~
Catrina Taylor is a science fiction author and the creator of Xarrok. Her first book was released in December 2011 and she has two additional books released, with three full length novels slated for release this year. This hardworking single mother takes pride in her children’s accomplishment, both living and fictious. Birth of an Empire 1 is available on Nook, Kindle and all ereading devices through Smashwords.com
You can learn about her world here:  http://xarrok.com
You can find her business: http://thewritingnetwork.com  and contact her on facebook  http://facebook.com/Xarrok