Strong is Sexy Heroine of the Week: Katie Walsh 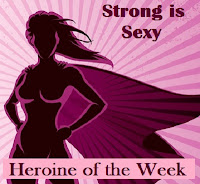 Katie Walsh is an investigative mythologist. She seeks to find the origin of Celtic/Norse legends and decipher what the ancients were trying to tell us. Katie believes these legends transcended time for a reason only through the ages the tales had morphed into “quaint” entertainment having no bearing on modern times.

In the first book of my series “Trove, The Katie Walsh Mysteries,” we find out that Katie is a survivor. Her parents had been killed in a horrific accident that was due to negligence. When the professional community closes ranks around the person responsible and he’s basically let go with barely a slap on the wrists, Katie realizes she can rely on herself. She forges on with her career and bruises a few egos in the process. She’s not out to destroy anyone, but in her quest for the truth, her work, based on valid facts and data, ends up invalidating some of her colleagues’ life-long research. Katie believes in bringing the truth to light rather than living in the shadows.

In Trove, life seems to continually through curveballs her way, yet she’s quick to regroup or at the least get out of the way. When the hero, Alec, comes roaring back into her life, she refuses to let him control her. The back and forth struggle between Katie and Alec reinforces in the reader’s mind that she is every bit as strong as Alec, at least mentally, and every bit his equal (but Alec wouldn’t have it any other way).

There is a book trailer at my website that captures the overall feel of Trove: BLURB:

Katie Walsh is an investigative mythologist seeking clues that could lead her into the very distant past and uncover the secrets of the mythic Norland. Alec MacGowan is an archaeologist searching for clues in the recent past in an attempt to bring a murderer to justice.

Anonymous lovers five years before, they’re re-united as their worlds collide when they are thrown together to decipher the murdered man’s notes and identify his killer. As the quest unfolds, they are forced to deal with their simmering attraction and hidden secrets.

Can they uncover the secret hidden in the murdered man’s notes before the killer finds them? And can they open their hearts to each other before it’s too late?


Follow Katie and Alec as they search for clues in their race to uncover secrets from the long past and their past while staying out of the killer’s cross-hairs.

Are you an author with a strong heroine in your book? Want to see her featured? Find out how here.