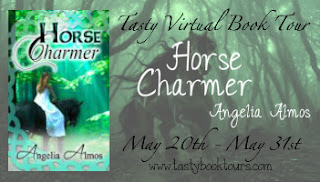 *Horse Charmer is on sale for $.99 (ebook) to celebrate the two year anniversary*

A gifted princess. A special horse. A quest for the truth.

At sixteen years old, Cassia would rather spend her days in the royal stables than in the royal court. But as the eldest child of King Robet and Queen Sarahann she obediently performs her duties as the Princess of Karah.

Her safe world changes forever when her father is murdered in the neighboring kingdom of Vespera. Cassia grapples with his loss as her mother prepares her for her new role as queen. Her first task - she must travel to Vespera to marry a prince she barely knows to fulfill the treaty her father signed just before his death.

Nothing is as simple as it seems with political intrigues and unusual powers shadowing Cassia on her search to find out who killed her father and why.

****My Review****
This took me some getting used to. The writing style has a nice flow, but it's a wee slow at first. Despite all the drama happening--her father's death, fighting with her mother, her shocking marriage announcement--my mind began to drift. However, once she escaped and started conversing with her horse, I was hooked. What an intriguing plot twist!

The heroine discovers she has a special power. She's able to charm horses and make them do what she wishes. While she gets to the bottom of who murdered her father and why, she begins to utilize these newfound powers.

There's a subtle romance going on with a horse wrangler, nothing too racy, and the ending leaves enough that you want to read sequel. And for a while there in the last quarter, I thought for sure the family wasn't going to get themselves out of this mess.

It kept me guessing and I want to mention...with fantasy, the author has the leeway to create their own world and do not have to be historical accurate. I've read old-world fantasy books that were supposed to take place in medieval times, but had balloons. This author didn't do anything like that. Her setting (even with the horse communication  was believable and I was able to transplant myself mentally into this world she created with the same ease as if it was reading a historical fiction.

Very well done. A likable and realistic heroine who at times acts impetuous. She's feisty without it being unbelievable. The prose was smooth. The action once you got to the middle entertaining.

Author Info
Angelia Almos' love affair with horses began when she was five years old and talked her parents into her first riding lesson. Horses have always been a huge part of her life. The initial idea behind Horse Charmer came to her when she was fourteen. The image of a teenage girl riding her horse through a meadow appeared. Who was this girl? Where was she going? What was she running from? Those questions led to the creation of Horse Charmer.