Maybe This Time by Jennifer Crusie 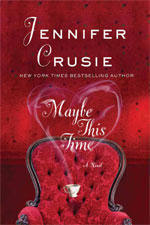 Think The Nanny (minus the funny butler and annoying Ce Ce)...

meets up with Ghostbusters in a mansion complete with a moat...

and add to that combination, a dash of Nanny 911 (cause of the screaming, bratty Alice)...

And you got Jennifer Crusie's new novel, Maybe This Time, a fun, light, and cute read.


Andie and North divorced ten years ago. Apparently he chose work over his wife. Andie is ready to move on and agrees to do one last favor for North and then cut ties with him and their former life together forever.


A distant cousin of North's passed away and left his two children in North's care. They are abandoned with a looney housekeeper in a 400 year old house (imported piece by piece from England) complete with a moat... and ghosts! Of course, Andie doesn't know about the ghosts when she agrees to go to the house for month and prepare the children, a boy and a girl, for school and life in Columbus, Ohio.


So... Andie arrives at the house and finds a sullen, rude girl that screams constantly, a boy that literally just eats and glares, a housekeeper drunk on peppermint schnapps, a ghost in a blue dress dancing and talking about love, a rather sinister ghost named Peter who believes he owns the house and also a ghost that fancies Alice (the girl) is her daughter. Andie wonders, is it time to call Ghostbusters or lay off the Amaretto in her nightly tea???

To complicate matters even more, Andie begins having feelings for North again.. and he's not even there! Is she falling in love with her memories or could things possibly work with North should they attempt it again? And what of the man she has been seeing, who wants to marry her? Decisions, decisions, decisions!

But first things first. Exorcise or negotiate with the ghosts. convince the children leave the house, and something must be done about that housekeeper! It all "hits the fan" with a funny seance. (At this point tho, so many characters show up, it's hard to keep track of who is who.)

This was a fun, light read and I really loved the heroine. She is a "ballbuster." Her mother in law even says so. She takes no lip from anyone and tells it like it is.   Four stars.

I got this ARC from a friend.