Yes She Can!: Women's Sports Pioneers by Glenn Stout

I could spend my review just gushing about this biographical book or I can do a really cool summary of it and hopefully get your interest.  It's a short read full of fascinating information about fascinating women in sports history.

The first woman the book talks about is Trudy Ederle.

Trudy was the first woman to swim the English Channel, all 21 miles from France to the coast of England.  Only 5 men had accomplished this task by the time Trudy did it in fourteen hours and 31 minutes, nearly two hours faster than the male record holder's.

Funny stuff:  Trudy and her sister invented the first bikini.  When Trudy first began swimming, she had a rope tied around her waist and instructors declared her "too wild."

Amazing thing:  Trudy was also partially deaf.  Thus, she helped not only the future of women's sports, but also deaf culture.

The second woman is Louise Stokes and I was unable to find a picture of her.  She was a runner and with Theodora Ann Pickett, one of the first African American woman to be on a U.S. Olympic team.

Amazing thing:  In Massachusetts, girls were not allowed on the boys' running field.  Louise and her team mates had to run alongside rail road tracks due to a lack of a real track.

Tidye was also an African American runner, daring to stretch her legs in a time when running was "dangerous to feminine nature."  Her and Louise were accepted on the 1932 and 1936 Olympic team.  Tidye is officially the first African American woman to compete in the Olympics.  Louise was unable to compete and there is sad story here, but you have to read the book to find out.

Another woman in the book is Julie Krone.

She was a female jockey in a time when the field was mostly dominated by men.  Come to think of it, the field is still mostly male.. She started as a hot walked and horse bather and in 1981 won her first race.

Amazing thing:  In a race one day, a fellow jockey (male) whipped her face, cutting her ear.  This chick didn't cry about it.. She punched him in the nose!  There's more to that story too, but I don't want to be accused of spoilers..

The last woman is Danica Patrick. 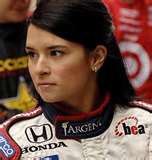 The book talks about her Formula racing in England, her sponsors, her quick rise to fame, and having to prove herself in the Indy 500 and win.

Amazing thing: She is only 5 feet tall and weights just over a hundred pounds.

I highly recommend this book, which I got from netgalley by the way.  The only reason it doesn't get a five star is because both Danica's and Julie's parts had a little too much "play by play" run down of their races; which car or horse was where at a given time...

Four stars.  And though this is aimed at the teen crowd, I think adults will love it just as much.