Suffragette in the City by Kate Marsh/Katie MacAlister 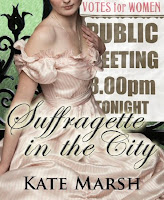 Women obtaining the right to vote was no easy feat as heroine, Cassandra Whitney complete with a "runaway tongue, odd interests, and an wholly unconventional nature" shows us in this novel.

It's London in the early 1900s and Cassandra has declared herself a New Woman.  She is not going to marry.  She is going to take a lover, smoke cigerettes, and fight for the right to vote.   She's funny, flighty, and topped with gumption.  It's during a protest complete with banners and women chained to a fence that Cassandra literally finds herself thrown into the arms of an insufferable, obstinate, and very fine man, Griffin.

She vows to have Griffin as her lover, but how are these two going to get from yelling at each other over tea (Griffin is anti women's suffragist movement and anti women travelers to boot)  to bedding each other down?  And Cassandra herself delcares, "I had not survived my father to have the first pig-headed man who caught my fancy to order me about."

Meanwhile, the women's suffragist union is about to divide.  More militant women want to take more extreme measures like rock throwing to make their statement while the traditional women wish to protest peacefully even tho it lands them in jail.

And yet another story line is a mystery... Someone is following Cassandra and threatening her.  The same person or persons could very well be the ones vandalizing Griffen's home and attacking the both of them.  What is going on?  Does someone wish to put a stop to Cassandra's fight for the women's right to vote or there is more going on?

Laugh out loud moment:  When Cassandra accidentally enters a "man only" store and sees some rather interesting pump like items... "It is supposed to increase the size of a genteman's apparatus.  Merciful heavens, who knew such things were in existence?"

I really enjoyed this and laughed quite a bit.  It's more a historical romance, but the suffragist movement had a major role and the romance aspect never overshadowed the story itself.  My complaint:  TOO much chatter and some of the characters were too dramatic to be believable.  Thus, four stars. 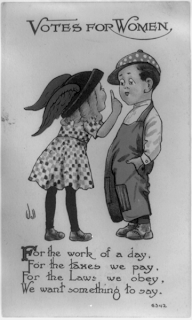 If you can't read that little ditty (Women's Suffrage Poem), here it is:

For the work of a day,
For the taxes we pay,
For the laws we obey,
We want something to say.

I bought this book from Amazon.﻿ It has a new cover, but I like the old one. ;)