Strong is Sexy Heroine of the Week: Isabel de Vermandois

In The Burning Candle, Isabel de Vermandois proves her inner courage by enduring the brutal dominance of both her parents, as they force her into a marriage with a man older than her father.  Although Isabel does not have a choice in her marital partner, she makes the best of life with Robert de Beaumont and becomes a dutiful wife. It is a fine balance for a woman of the medieval era; knowing what to bear and just when to stand up for she believes in against the odds. Robert appreciates his wife’s beauty and wit, but Isabel surpasses all of his expectations with her integrity. To do what is right when there is no reward takes the kind of personal strength that Isabel possesses.

The greatest test she faces in later years is the temptation offered by William de Warenne, a man betrothed to her dear friend.  Although Isabel acknowledges a growing attraction to William within herself alone, commitment to her marital vows and the children she has given Robert mean a great deal. She cannot abandon ideals she has long held just for the sake of a moment’s forbidden happiness with her lover. She is also smart enough to know the repercussions for her and William if Robert should ever discover their illicit love. 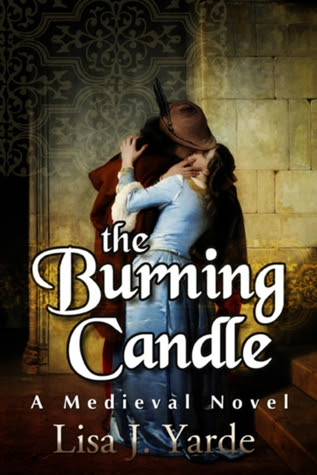 Blurb: In eleventh-century France on the eve of the First Crusade, Isabel de Vermandois becomes the wife of a man old enough to be her father. He is Robert de Beaumont, Comte de Meulan. A hero of the Norman victory at Hastings and loyal counselor to successive English kings, Robert is not all Isabel had expected. Cruel and kind by contrast, he draws her into the decadent court of King Henry I. As Robert's secrets are unraveled, Isabel finds her heart divided. Her duties as a wife and mother compel her, but an undeniable attraction to the young William de Warenne, Earl of Surrey, tempts her. In a kingdom where love holds no sway over marital relations, Isabel must choose where her loyalties and her heart lie.


Based on the life of a remarkable medieval woman forgotten by time, The Burning Candle is a story of duty and honor, love and betrayal.


My dear, sweet Isabel, you are the only woman I have ever loved. I shall worship you until I draw my last breath.”
She swayed and her knees wobbled. The steady knot in her belly tightened. “Amieria does not deserve your faithlessness.” Her voice shook.
“None of us deserves this folly. Your friend is doomed to a mockery of a marriage, while I must forever mourn your absence from my arms. You hate me. My betrothed is your dearest companion. Would that God could look down and release us from this misery.”
“There is no such hope. I cannot remain here, knowing you harbor such feelings for me.”
He lifted her hand, fingers closing on hers again. “You believe me in my love?”
“You must see the impossibility of your wishes. My husband commands my fealty. I owe all to him. I cannot betray him, no more than I could forsake the bonds of friendship with Amieria.”
“Then tell me the truth and it may ease my pains. Tell me you despise me above all others and there is nothing worse in the world you might imagine than being the object of my affections. Tell me you could never love me as you have loved your husband.”
A teardrop spilled upon her cheek, followed by another. He released her, yet reached for her face. He stroked the tears away with his thumb. “Say it, Isabel.”
“Why must you press me for the truth when you know it? Must I be cruel, so you could claim it as a kindness?”
A rueful laugh rumbled his chest. “I have despaired of your kindness. Shall I force my attentions upon you in the hope you may fully express your loathing?”
He joined her on the step suddenly and forced her against the stonework, his arms braced, palms flat on either side of her head.
She twisted and steadied herself against the wall, shaking her head. “Do not do this, William.”
“You say my name at last. It fills me with the same hope I once carried, anticipation you would whisper it one day in a moment of passion.”
“It is false hope! I do not desire you.”
Perched precariously on the stairs, she could not dispel the shaking in her limbs, as he leaned closer and dipped his head. “Show me! Strike me or spit in my face if you must. I shall have the final proof of your hatred.”
He cupped her neck and pressed his body against hers. Delicious warmth radiated from him and chased away the cold. “Tell me, Isabel. Tell me you feel nothing for me.”
Her throat tightened as if robbed of speech. His fingers caressed her skin even as he pulled her closer. He would kiss her and she would let him. His lips hovered just beyond her reach. She only had to give in to the desire in his tremulous voice. It would be so easy, effortless.
“Isabel?” A final warning laced his guttural tone.
“I cannot!” Her scream echoed. She pressed a trembling hand to her mouth as if it would hold back the terrible truth. “God, forgive me, I cannot speak the lie.”
She sagged as his lips pressed against her brow. His arms came about her, encasing her in his solid embrace. “Then we are both fools.” She surrendered to him in full as he braced her with all his might when she would have fallen at his feet, weeping.
She sobbed against his neck, her heart hammering. He rubbed her back and murmured to her. If he meant to offer comfort, his gestures only pained her more. How had she allowed him past her heart’s defenses? At last, she recognized that he had always been there, since their meeting at Vatteville, where he offered Lovvet. His obvious attraction for Isabel had long awakened and stirred something inside her that Robert had never touched. The desire to love and to share love with another beyond a sense of duty, or what was right or honorable. She could not deny William’s feelings or her own any longer.
When she looked up, he cupped her wet face in his hands. “Come with me to Castle Acre, now. I shall claim you for my own. Not even your husband or King Henry’s wrath would stop me.”
His impetuous vow should have frightened her. It did not. Instead, a thrill raced through her. She could have laughed through her useless tears.
“You cannot mean it! Have you lost your senses and your heart before me? The scandal would destroy us both.”
She slid her hand between their bodies, beneath his mantle and pressed the point where his heart pounded, strong and steady. “I cannot leave with you. Nor can I forsake my marital bonds and sin with my body as I would in my heart.”
When he would have spoken, her forefinger against his lips stilled him. “I may have betrayed Robert and Amieria’s friendship this day. I cannot commit adultery. Duty compels us. I remain bound to my husband and you to the king’s wishes for his daughter. Whatever I may feel for you, I cannot injure Robert or Amieria. They must never know of this betrayal. It would destroy them, as it would doom us.”

Are you an author with a strong heroine in your book? Want to see her featured? Find out how here.