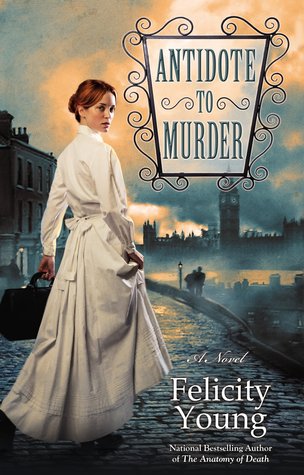 This is probably my favorite historical series featuring an amazingly strong heroine. Dody not only is a doctor at a women’s clinic, but also works with the coroner, and this occurs in a time when this was just not acceptable by society’s standards, Victorian England.

Book two has a new mystery and this time it includes a personal and professional attack on Dody herself. Lead poisoning, arsenic, illegal drugs, women dying from illegal abortions, and a big arrow in the form of accusatory letters and pointing fingers and paid-off lying witnesses says Dody is the culprit. If she doesn’t find the one behind these horrid activities, she’ll go down for the crime. It’s not only the end of her career, which was hard to start in the first place due to prejudices against women, but she’ll be in jail.

The romance between her and Pike continues, but is shaky. There’s a side story involving Pike and Mata Hari and spies. This has to be my only disappointment with the story. I feel so much more could have been done with a character such as Mata Hari. Part of me feels as if I’ve been teased.


I appreciate all the themes in this, skillfully and artfully entwined with the mystery. Remember, this was a time when a woman could not have a career and a marriage both. Marriage often meant job loss. What is a woman to do when she is offered something she desires, yet knows it will mean the end to all she’s worked for? As in book one, Dody faces a lot of extreme prejudice and I felt her frustration and moments of indecision. When is enough enough? To speak her mind usually leads to a man declaring her too emotional. Urgh. I wanted to jump in the book and smack a few people.

Also appreciated the birth control theme and Dody’s desire to educate the classes on pregnancy prevention. This was a hot topic back then and it made an interesting side story.

I’ve said this before and I’ll say it again: I like to be able to suspect whodunit. I like some clues laid out for me, enough for me to come close but not quite, and this book skillfully pulled it off. I had a strong suspicion whodunit by the time I hit 75% but I didn’t figure out all the details. Good job!

Another highly enjoyable installment in this series. I bought this on Amazon.