The Wife, the Maid, and the Mistress by Ariel Lawhon

Truly a riveting read, drama at its near finest. I almost gave this a five. 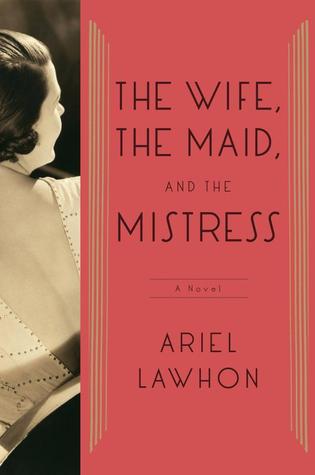 A man is missing, possibly dead, and despite all the gangsters, lawyers, dirty detectives, newspaper reporters, this isn't loaded with testosterone, but estrogen. The mystery follows three different woman and what they see and how they all in their own ways, willingly or unwillingly, participated in the death/disappearance of a man who is...well, better off dead. LOL

Maria is the maid, who comes off as rather innocent, but surprisingly is not. She's paying for her husband's detective position.. Stella is the slighted wife. She seems to know more than she wants to, has to sit on a secret for 38 years. Ritzi...is a hard-to-like showgirl/woman of loose morals. She is dumb. I had a harder time with her, but have to admit her story adds a certain charm and ties things up. Like her or not, she's necessary. Her parts permit the reader to see the world of Broadway during this time period, what all a woman had to do to obtain stardom, the regrets.

So we see three different walks of life: the wealthy wife, the middle-class maid, the struggling starlet. The book does a superb job showing us the time period.

Everyone has their own dilemmas and the book keeps you guessing as to what's going to happen next and to who. I loved it, except for the jarring of time jumping. Most of the story occurs in a neat time frame, but at times, it suddenly jumps back from August 1930 to February 1930 or even in some cases, years before. I almost had to grab a pen and paper to keep track, especially at first, until I became accustomed.

I recommend it though. It would make an interesting gangster movie/tv show, somewhat like Mob City, but with more estrogen than testosterone.

Reporter: "I need a name."
Ritzi: "Just call me a source."
Reporter: "I got sources coming out of my ass."
Ritzi: "Sounds like a personal problem."

Guess maybe I liked Ritzi more than I thought. :)

I received this via Shelf Awareness and Netgalley.