Q: What Happens When the Pacific Northwest Secedes From the United States? Guest Lisa Nowak. #FREEBIE

A: A girl comes to the rescue.

Please welcome Lisa Nowak as she talks about her new release, the inspiration, and shares a free book with you.

I've always liked to write about strong female characters, so I was happy to stumble upon Book Babe while researching reviewers for the first book in my Full Throttle series. Ironically, that book had a male protagonist, but it also featured a female mechanic. I'm now working on a new series, and this one includes several gritty young women.

The idea came to me almost a year and a half ago, when my husband told me about a story he'd read in the Portland Mercury. According to the article, fifty years from now much of the United States will be devastated by climate change. The Pacific Northwest will remain relatively unchanged in comparison, which will result in an influx of climate refugees.

"That sounds like a great set up for a dystopian YA novel," I said. Within minutes, I had the basic premise outlined. The Pacific Northwest, disgruntled over the population boom, secedes from the United States to form its own country with a closed border. Wealthy Americans want to buy their way in, so poor people begin disappearing off the streets. Naturally, I needed a romantic aspect, but I wanted to give it a twist. I decided my protagonist would be a girl whose family had disappeared, and the love interest would be the boy whose family had displaced hers.

Over the coming weeks, the idea grew to include an existing political movement to form a bioregion called Cascadia, Portland's major league soccer team and its rowdy band fans, the Timbers Army, and a rock star-turned-activist who becomes the first president of the new nation. My husband, friends, and fellow writers supplied me with myriad excellent ideas and educated me about the subjects of history, politics, computer science, medicine, and soccer.

So what about those strong female characters? Well, first there's Piper a tough, goal-driven teen whose life revolves around becoming a doctor-at least until that future is snatched away when her family is kidnapped. As little girl, she had her paramedic dad quiz her on the circulatory system and the names of bones for fun. She plays with a medical training simulator-Sim Surgery-the way most teens play video games. Her best friend Bailey, while equally strong, completely embraces her girly side. She's a fashionable flirt and a kickass soccer player with a gung ho love of adventure. A third character, Zoey is the 11-year-old sister of Piper's love interest. Though she's battling a terminal illness, she's a snarky computer genius who doesn't want anyone feeling sorry for her.

Several writers I know have been experimenting with serialized stories, and this idea seemed perfect for that venue. I envision it much like a season of a television series. Each short episode gives you part of the story, with the entire plot-line playing out over a nine book "season." I currently have the first three episodes published, (you can buy them individually, or as a box set) and the fourth will be released in early March. If you aren't sure this is for you, fear not. You can try the first episode absolutely free at any of the retailers listed below.


What if the Pacific Northwest seceded from the United States? In 2063, it has.


The climate change that's devastated all but the Northwest corner of the U.S. has been around since before Piper Hall was born. She doesn't spend much time thinking about it, the secession that created Cascadia, or the closed border, erected to keep out climate refugees. All she wants is to get through high school and earn a medical degree so she can pull her family out of poverty. Piper's sure her little brother's stories about poor people vanishing are just rumors-until she comes home to an empty house. Losing her future, her family, and her freedom and forced into hiding, Piper has to find a way to get to the bottom of the disappearances. But the only one who can help might be the very boy whose family has displaced her own. 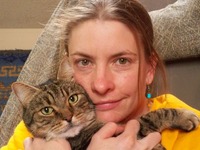 In addition to being a YA author, Lisa Nowak is a retired amateur stock car racer, an accomplished cat whisperer, and a professional smartass. She writes coming-of-age books about kids in hard luck situations who learn to appreciate their own value after finding mentors who love them for who they are.

Lisa has no spare time, but if she did she’d use it to tend to her expansive perennial garden, watch medical dramas, take long walks after dark, and teach her cats to play poker. For those of you who might be wondering, she is not, and has never been, a diaper-wearing astronaut. She lives in Milwaukie, Oregon, with her husband, four feline companions, and two giant sequoias.