It’s been a long time since I’ve read a contemporary romantic thriller like Affair in Athens by Matina Nicholas.  The aspects of its description that most interested me when I agreed to review it were the mentions of Greek resistance to the Nazis during World War II, and the Roma or Rom otherwise known as gypsies.  These topics dovetail with my interests in history and minorities.  Yet neither of these subjects are major focuses of the plot.  I won’t say that they are completely unimportant to the book, but any reader who chooses to read Affair in Athens because it deals with these subjects will be disappointed. 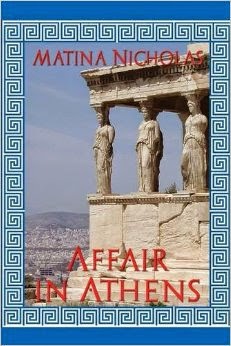 The main focus of the book is unapologetically on heroine Athena Vallas’ romantic life.  I realized that when the research on the book she intended to write about her grandfather’s heroic work in rescuing Salonika’s Jews was glossed over.  We don’t see her conduct even one interview with a Jewish survivor.   On the other hand, this novel has a great deal more historical and cultural content than contemporary romantic thrillers usually do.

I would also like to applaud the characterization of Athena.   Even though I didn’t always agree with the reasons behind Athena’s decisions, I did think that she made the right ones.  She maintained her self-respect, and steered clear of involvement in illegal and destructive activities.  She consults friends and relatives, ­but makes her own choices. She is strong, loving and nurturing.

I did think that her friend, the gay painter Byron Dillon, was more than a bit stereotypical.  I wish that more authors would be willing to challenge themselves to create gay characters who are as complex as their heterosexual characters.

In contrast, Luke Lambros is the most multi-faceted character in the book.  He exhibits the entire spectrum of traits.  His background and motivations remain at least partly mysterious throughout the narrative.  As a man of secrets, he reminded me of a number of well-known literary characters.   I wouldn’t be surprised if author Matina Nicholas drew on literary sources to create Luke.

Although I might have preferred to see Athena doing her work as a scholar, and a more nuanced portrayal of the Rom characters, what we do get in Affair in Athens is a fairly well-written novel that affirms both the independence of women and the value of family.

Editor Rosa Sophia sent me a copy of this book in return for an honest review.