Chateau of Secrets by Melanie Dobson 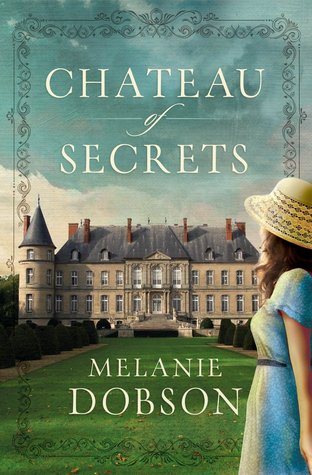 “Courage doesn’t mean you stop being afraid. It means you continue to fight, even when you’re terrified.”

This is a story that reminds us not to take people at face value. What you see on the surface is not always the same as what’s going on beneath. I was reminded of this as I read both the contemporary and the historical story. Each story line transported me to another place or time or place and time. From modern-day Virginia to WWII France…

I love the historical heroine in this. She’s so very brave and compassionate and her story made me ask myself, “What would I do?” There are so many instances in which she can’t win, really. And she’s faced with so many choices and each time, she makes a choice to benefit not herself, but those she cares for or wishes to help, such as children.

Every day they had to make choices. In order to survive, she and Josef and other like them had to choose the least of the evils to do the most good.

From the Jew in the German Army to the French translator in bed with German officers to a journalist who once loved to party to a lying politician wannabe, we are reminded about not being quick to judge. We not only don’t know the full story, but we often make the wrong assumptions.

While I preferred the historical story—a young woman in France hiding Resistance members and children right under her chateau while serving the Germans dinner in her dining room—I also like the modern story, though I didn’t care for the heroine quite as much. My only quibble, matter of fact, is the modern heroine’s story and issues were far too predictable. I saw it all coming from very early in the book. I'd also have liked Lisette's actions explained a bit better. I seriously doubted she did what she did just to get mascara...

I also learned some new things about how the French citizens behaved during their occupation and about the gendarmes.

I didn’t realize until I looked this author up that she writes Christian fiction, but this particular novel did not have a lot religious stuff until the last quarter so. Then there is a lot of prayer and wondering what god wants her to do, and there’s a journalist who somewhat preaches a bit, but it was very little and should not offend the non-religious. I was not the least put off and as a matter of fact, I’ve purchased another title by this author. I love her writing style and if her other books are anything like this one, I’m certain I’ll enjoy them too.

I received a digital ARC of this via Edelweiss. Quotes may be different in the final copy.