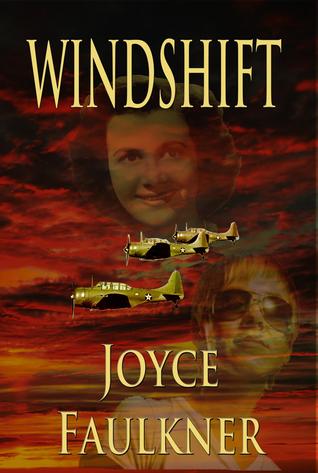 What We Read:
Shirley Maxwell is a troubled young woman facing a complicated personal life, a culture that restricts female options, and a world at war. Yet, together with friends -- Emmie, Delores, and Mags -- she joins Jackie Cochran's Women's Air Service Pilots program (WASP) and participates in the adventure, challenges, and tragedies of the 1940s with determination and courage. Shirley and her friends know what they are tackling will be hard, but they do it anyway and relish the effort. In the process, they change what is possible in the minds of young girls everywhere. Lively and moving, Windshift inspires and educates. Appropriate for history buffs interested in the World War II era, students of social change, those who love tales of derring do -- and those who just love airplanes.

What We Did:
Shomeret read the book, wrote down her thoughts, and Tara read the book a week later, emailing her two cents to Shomeret, and a discussion was born. Thus, our review.

Our Thoughts:Tara: I have a major complaint right off the bat. I can't stand Shirley, the heroine. She reminds me of Jack Nicholson's character in As Good As it Gets. WAY too uptight. She's constantly thinking of dirt, constantly criticizing others in her mind for their appearance or something, and even goes so far as to make the sheets a certain way. It's taking NEAT FREAK to a whole new level, making me think she has an obsessive compulsive disorder. I feel the author erred badly in one other thing regarding this heroine too. SHE DOESN'T LOVE TO FLY. For me, part of the enjoyment in reading about women pilots is always their love and passion for what they do. I can live through them. With this heroine, I'm not getting that.

What are your thoughts about the heroine? How do you feel about the other three pilots, Emmie and Delores and Mags? Mags makes me think of Pancho Barnes and I wonder if she was somewhat based on that woman, even though the real-life aviatrix was not in the WASP. I think she's my favorite character, with Emmie a close second.

Favorite line from Mags: "They need a strong hand, an educated seat, and a lot of praise."

Shomeret: I didn't like Shirley at all. I think the point of having her as the central character is that Joyce Faulkner thought readers would identify with her more precisely because she's more concerned with finding a man than with flying. At one point Shirley tells Mags about an incident in her past that is supposed to explain why she cares so much about getting married. As an explanation, it didn't make sense to me. I wouldn't have reacted the way Shirley did to that experience at all.


Tara: I haven't gotten the impression she's interested in men yet. I can't imagine her having sexual relations. Too germy and messy. She'd have to cover her in body in saran wrap.


Shomeret: I liked Emmie. Delores got more interesting to me later in the novel. There's another woman pilot who would have made a terrific central character.

I love Mags. This book should be about Mags. She's definitely the most interesting character in Windshift.

As a book about Shirley, it's a soap opera. Many people love soap operas and would therefore give it five stars.


Tara: Meh. Not into soaps. At 40%, I'm pleased that we've finally moved on past everyday life and horseback riding (it had a slow start) and are down to the flying stuff and issues the women faced, such as crappy planes, animosity from the men, their tasks.

Shomeret: What I didn't like about the flying content is that Shirley only does routine assignments. Of course, they aren't described because they aren't in the least bit interesting. Emmie and Mags have interesting assignments, but we are only told about them in summary. There's an incident involving Emmie and Mags that was very dramatic, but we aren't shown anything about it. I feel that Joyce Faulkner's dramatic priorities are very misplaced.

Tara: That is very true. She kept to the easy, safe stuff, too scared to do much else. As I said above, she had no passion for what she was doing. Regarding Emmie,  I especially like how she talked about the men's reaction to her and how she thought if she just smiled and was nice, they'd change their tune, but instead...as she says, "If they are so good at everything, why are they scared of what we might be able to do?"

Moving on...while I was initially really stoked that there is a hearing-impaired man in this story, I hate that he was given this horrid attitude toward women. His views on that girl getting pregnant, it being her fault, and a woman's "place" really ticked me off. I'm afraid there may be a romance here (I think that's a dude on the cover, lower right?) and it makes me sick. Though if it's between him and Shirley, I'd say they're meant for each other. I still don't like her. Too snotty.

Point in the book's favor: This scene between Grant and Shirley in which his views on women come to light DOES do a good job of showing us the confused sexual atmosphere of that time period. ...we were also in a new world where men and women no longer knew what to expect of one another.

Shomeret: There's other period atmosphere in this book. Women aren't allowed to fly when they're menstruating. Joyce Faulkner has a blog entry about that which I found on Goodreads called "Women and Their Periods" in which she points out that this rule was unenforceable because male officers and physicians would be too squeamish about menstruation to ask a woman pilot whether she's menstruating. Women were never supposed to mention such a thing because men couldn't stand the sight of a woman's blood.

Tara: I noticed that convo, but it didn't impact me because it's something I've known for a long time, that women were not allowed to fly whilst menstruating. It's been mentioned in every WASP book I've ever read, but that is terrific knowledge for anyone who hasn't read about them before.

Shomeret: I've read a couple of other WASP novels and didn't notice the menstruation prohibition before. This caused me to do some research. I found out that Opal Vivian Hicks Fagan was a WASP who proved in 1944 that women can fly while menstruating. I also read in an excerpt from Nancy Love and the WASP Ferry Pilots of World War II that Nancy Love appealed the rule grounding menstruating pilots, and that General C.R. Smith ruled in her favor on April 17, 1943.

Tara: I have read so many at this point... It's also been mentioned in a few nonfictions about women in aviation, but it's a fabulous thing to include in the book. BUT, the aircraft mechanic in me is a bit ticked off that I can find no data on this mysterious aircraft, the Wiley Fox. Anyone who does their research can find out what aircraft the WASP flew and I've never heard of the Wiley Fox before. I'd like to think some research was put into this... When I read plane books, I look the planes up and get their data. I want to know. I'm not finding anything called the Wiley Fox. I'm hoping I just missed something pertinent somewhere and this was not just a made-up aircraft, 'cause there are so many fabulous planes from this period that could have been used.

I did, however, find the A-24 the ladies flew for target pulling: (photo from Wiki)

Shomeret: It doesn't surprise me that the plane is fictional since Wiley is a fictional character in the novel.

Tara: It irritates me nevertheless. It would not have been hard to use a real plane and factory.

At 50%... omfg. They had to make this Grant guy not only anti-women rights, but racist too? "They do hate Jews. They feel about Jews like we feel about the Japanese and Negroes."  What does she see in this guy? But for that matter, what does he see in her?

Shomeret: It was obvious to me that Grant was Mr. Wrong with his attitudes toward women, but I didn't read Grant as racist. I saw that conversation as being primarily about not wanting to believe that Germany had done such terrible things because he himself is a German American. He agrees with Shirley when she tells him that ethnic cleansing is the wrong thing to do. There's some Holocaust content later in the book. It's supposed to show Shirley's compassion, I'm sure.

Tara: I came across that and while I applaud her helping her friend, we have to keep in mind it wasn't really HER but her daddy's doing...

At 55%, the dog thing...I can't say I'm surprised. As a pet parent I've been perturbed throughout the novel with the girls' ignorant treatment of the dog. You do not feed a dog tootsie rolls, bologna, and Jelly Beans. I told myself they didn't know these things in the 1940s and ignored it, but this horrid occurrence I won't speak of...doesn't surprise me in the least. How dumb can you be? Seriously?

Shomeret: So we don't get any great flying scenes. There's supposed to be romance, but I don't see this as a romantic book. Shirley does grow a bit through her exposure to Mags, I think. There's also a crisis in Shirley's life that matures her. Because of that, I'd consider giving this book two and a half bikes, if that were possible. I still didn't really like the book.

Tara: I began to skim at 62%. Everything in it WASP related, such as the B-29, the sabotage, the cockpit that won't open and the fire...it's all been done in every single WASP story ever told. Nothing new here. I finally hit Shirley's big crisis--the most unique aspect of the story--and I feel like that was supposed to endear her to me, but I felt her reaction...making all these people take care of her and risk themselves...was just appalling and in the end, I have to say this story didn't work for me. The romance, the REAL one, came too late, the heroine persistently came across as selfish, weird, and snotty and nothing, not even her crisis made her better in my eyes.

Shomeret: I think that the point of Shirley going through the crisis is that she realized that she didn't want to be in a situation where she had no control of her life which is what she'd have with Grant.

Tara: Excellent point indeed. Now that you point that out, I see the reason, but I still don't like her or her actions. For me it's important to like a heroine to like a book...so...

Shomeret received an ARC of this title on Netgalley and Tara bought it on Amazon.