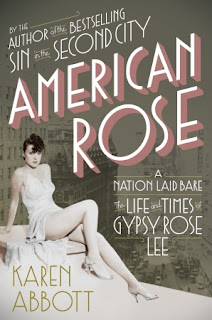 This is a biography about one of the most famous strip teasers in American history.  And I don't mean pole dancing, but burlesque.  This is a woman who would remove pins from her outfit one by one and throw them in a nearby tuba and show only one body part at a time.  It was stripping before it became "stripping."  It was stripping when stripping had a measure of class about it.  (I know that sounds funny, but seriously.)

Gypsy Rose Lee aka Rose Louise Havoc aka Hard boiled Rose had a rough life.  She was an unwanted child.  When her prettier, more dainty sister was born to her mother, Rose, her mother actually changed Gypsy's name from Ellen June (the more desired and prettier name) to Rose Louise in order to give the new, better daughter the name Ellen June.  Neither sister was educated.  Each one was forced to sing and dance in Vaudeville their entire lives and support their greedy mother, Rose.  The book talks a lot about the growing tensions between Rose and June who later became a well known actress, June Havoc.

"June is idealistic and Gypsy pragmatic, Gypsy untalented and June unbright﻿, Gypsy makes life fun and June infuses it with drama; June is generous and Gypsy tight.  June is an actress but Gypsy is a presence."  That sums it up nicely.  Their mother pitted the two girls against each other their entire lives.  However, even after their mother's death, both women competed against each other.  They even attempted to write their memoirs at the same time.

A lot of the book is about their mother, a cruel woman that worked them to the bone and gave no thoughts whatsoever to June's bleeding three year old toes.  She stole from hotels and forged documents.  She was determined to keep her daughters babies the rest of their lives and lied about their ages to the point the girls didn't even know old they were.  On her deathbed, she told Gypsy, "This isn't the end.  Wherever you go, as long as either of you lives, I'll be right there. . . . So go on, Louise, tell all your classy friends how funny I was, how much smarter you were than me.  When you get your own private kick in the a**, just remember:  it's a present from me to you."

﻿The book chronicles Gypsy's somewhat unwilling move from the Vaudeville circuit to Burlesque, her transition from virginal girl to a gangster's woman, her numerous different skits, her novel writing, her marriages, her ulcers, her hated teeth, and how moving pictures ruined the theater life.

I found the book interesting, but there were two things I didn't like.  1.  The book jumps back and forth rather than going in chronological order.  One chapter is about the creation of a cow costume they used in the 1920s.  The next chapter jumps to Gypsy's affair with Mike Todd in the 40s.  The next chapter goes back to when she was 15 years of age.  2.  I didn't care for the parts about the Minsky brothers.  Yes, they are relevant to Gypsy's tale.  I just wasn't interested in them.

Fabulous quote:  "I want to be a legend.  A fad is just one step along the way."

I received this book from the publisher via Shelf Awareness.  Thank you.