Welcome back to Helen's Holiday Tale! Here is part three. If you missed part or part one or two, go back and read those first, or  you may be a tad lost! LOL 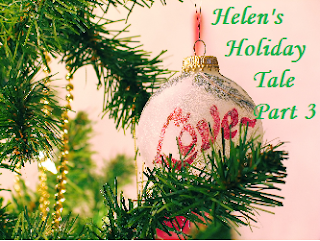 “She’s back!” A man’s voice, not George’s.
Helen blinked rapidly and stared at the man leaning over her. He was a young whippersnapper wearing an EMT outfit. What had he done? Had he brought her back? The damn fool! 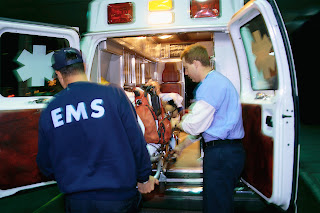 But, wait…she had things to do to make things right again. Her strange conversation with George came flooding back to her at the same time her blood starting pounding through her veins again.
“Mrs. Bakerson, you gave us quite a scare. Can you hear me?”
Helen tried to move her head, but it was hard. She felt so weak and strange.
“I think you can, Mrs. Bakerson. You’re very lucky. Mindy and Lucy found you. If it wasn’t Christmas day…”
What the heck was the man nattering about? Helen groaned and reached weakly for him, but found her arms wouldn’t cooperate.
“We’re taking you to the hospital. Hang tight, okay,” the EMT just kept chattering.
Helen was lifted very gently by two medics and carried slowly out her front door. From the corner of her eye, she saw two frightened looking girls—the same girls she’d yelled at earlier for being in her yard. Both girls were sniffling and rubbing their eyes with their mittened hands. What was wrong with them? 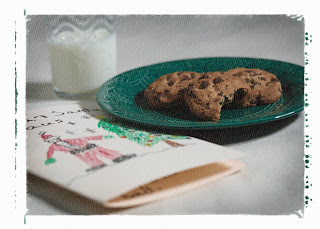 Suddenly, the blue-eyed one stepped forward and held out a card to one of the EMTs. “Will you give this to her when she gets there and is better? It’s a Christmas card we made for her in school. We’ll save the cookies until she comes back.”
“That’s a good idea.” The EMT reached for the card and tucked it into his vest pocket. Helen saw there was a childishly drawn snowman on the front of it. She felt a tear slide down her cheek, but she couldn’t will her limbs to move to wipe it off. They were still as frozen as the ice she had just skated on. Or had that been real? Her body felt so heavy. Everything was strange. “And yes, keep those cookies until Mrs. Bakerson is better. She’ll be eating hospital food for a while.”
Drat!
“And you girls did the right thing,” the other EMT added. “Calling 911 like you did when you found Mrs. Bakerson was smart.”
The little girls merely nodded, their eyes wide.
“Poor old lady shouldn’t have been digging around in her attic,” the first technician continued talking to his partner as they loaded Helen—unceremoniously in Helen’s opinion—into the back of a waiting ambulance.
I wasn’t digging around in my attic, you whippersnappers!
“I know. What was she planning to do? Take them old ice skates to the lake? She wouldn’t have lasted five minutes out there.”
Old ice skates? They must have been George’s, because hers were long gone. Helen smile, closed her eyes, and rested.

Don't worry, readers, she's not dead! Come back tomorrow to find out what Helen does in the new year.
Posted by Tara at 7:00 AM