Whatever would possess a woman to dress as a walking, talking holiday? And how can romance possibly evolve from a chance meeting on an airplane? Find out in Lorraine Nelson's short but cute High-Tech Holiday. I got more than a few chuckles from this one. It was a fun book to edit and read. 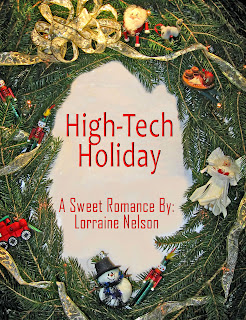 Kris Temple is a web graphics designer, an ambitious entrepreneur striving to survive in a dog-eat-dog world. She also wants to win her family’s Christmas contest. She adorns herself in full holiday gear the night before thanksgiving and is flying home fully decorated. She's thrilled to find herself seated next to a handsome man. But Kris has a speech problem. However would she converse with this man without stuttering and embarrassing herself?

Aaron Masters is not thrilled to be flying economy, but his personal jet is in for repairs. He’d had to scurry to the reservation desk at the last minute to book a seat on the only flight out, and now he finds his practical, no-nonsense demeanor assaulted by a woman dressed as a holiday advertisement…his seatmate. How could he hope to ignore this woman for the entire flight?
With their flight being rerouted, calls from her ex-fiancé/co-worker pleading for assistance, and his ex-girlfriend stalking him, they are certainly in for a memorable flight.

Excerpt:
“Ladies and gentlemen, this is your captain. We are being rerouted due to a severe storm front sweeping down from Canada. We are unable to return to Chicago or continue on to Minneapolis.” There was a general murmur of discontent at this announcement.

“We are being rerouted south to Atlanta. Attendants will be on hand to assist with reservations for accommodation and help reschedule your flights. We apologize for the delay in your travels but deem the safety of our passengers our top concern. We are sorry for any inconvenience.”
“I should have stayed in Chicago,” Ethan mumbled.
“I'm going to miss the contest. Darn.”
Ethan pulled out his cell phone. “George, have Donald bring the car around to the airport and instruct Maria to make up a guest room. I think I have a travel companion who'll be staying overnight.” He signed off a moment later and turned to her. “I hope you don't mind me making plans for you, but since Atlanta is one of the corporate locations for the businesses I run, I know finding decent accommodation will be next to impossible.”
She hesitated briefly, before replying, “That sounds fine. Thank you. Are you sure it won’t put you out?”
“I have a six thousand square-foot loft. You won’t be crowding me,” he said with just a hint of a smile.
“I should call my family and let them know about the delay.” Nothing like stating the obvious, Kris, she thought with disgust as she flipped open her cell phone.
“Hi, Mom. I'm going to be delayed. They've rerouted my flight due to a storm. Yes, we’re landing Atlanta. No, I have all my luggage with me. Yes, Mom, I do have clean underwear,” she whispered the last part. She could feel the flush of color rushing into her face. God! How embarrassing. Once again she could tell he was listening to her every word. Especially when she whispered her response to her mother and he'd leaned closer.
“Yes, I'll call as soon as I land. Bye for now.”
Shoving the phone deep into her pocket, she turned to see a huge grin on the handsome face next to her. “Are you enjoying yourself?”
“More than I ever thought possible.” His answering smile showed off a dimple in his right cheek.
“Well, I'm feeling rather exposed at the moment. So maybe you can share something personal about yourself?”
“Actually I was going to ask you what color.”
“What color?”
“Are they?”
“Are what?” she was starting to wonder if he was a little tipsy.
“Your underwear.”
“That is none of your business,” she admonished, incredulous he would even dare ask.
“Well, it sounded like your mom was concerned about it. I just figured I should be too.”
Now she could see he was really having fun at her expense. But then, it was kind of funny that a successful, independent woman had a mother who still wanted to make sure she had clean underwear in case of an emergency.
“My mom's a bit old-fashioned and still thinks I'm twelve. She treats all of us that way.”